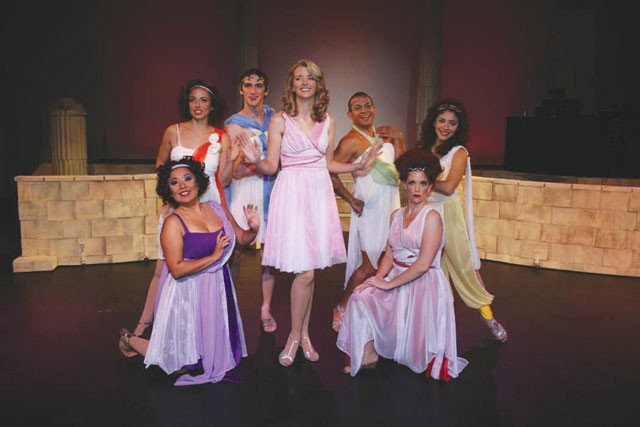 The San Pedro Playhouse’s season opener — a musical evisceration of the 1980 cinematic stinker Xanadu — reveals a few truths. First: it conclusively proves that the years 1975 to 1985 produced the most laughable trends in fashion and choreography since, say, the mid-1500s (and, still, there’s something to be said for Morris dancing). Second: the sound system on the main stage continues to occasionally sabotage its actors by producing audio that’s tinny or muddy (which has got to be frustrating for everybody on stage).

But the most pressing of truths is this: intentionally campy theater—theater that willfully mocks the art and sincerity of other artists—succeeds only if it is performed with a precision and expertise that dwarfs the talents of competing ‘straight’ theater. Camp is a theatrical mode, not a genre; it celebrates bad taste without necessarily adding anything worthwhile. If one sees a mediocre production of Carousel, one at least leaves the theater content in the knowledge that the creators have attempted to say something important about the human condition, however imperfect the instrument.

But if one sees a run-of-the-mill production of camp — which is what we have at the Playhouse — there’s no such pay-off. Xanadu celebrates style over substance, but that style must be gloriously effortless and seemingly sincere. Any wink to the audience gives the game away. The only actor who really gets both aspects of camp is Stephanie Bumgarner, as the well-intentioned and impossibly chipper Greek goddess Clio; this ever-vigilant muse must travel to Venice Beach in order to rescue despondent sidewalk artist Sonny Malone, who dreams one day of opening his own roller disco. (Yes, that’s really the story. Book adapter Douglas Carter Beane had his campy plot handed to him on a silver surfboard.) Bumgarner is simply great: channeling Olivia Newton-John (including the Aussie accent), she actually makes you believe in the transcendental properties of roller-skating in legwarmers. And with a bright soprano tone (and even brighter follicles), Bumgarner looks, and sounds, the part of an adorable beach babe: she’s enough to make anybody forget the Carter administration.

But casting problems plague much of the production. As Sonny Malone, the hunky and sun-addled male lead, Travis Trevino is simply miscast; he just doesn’t radiate enough wattage to anchor the show’s many production numbers. (The first act duet “Suddenly” is especially awkward in its singing and staging.) Kevin Murray, as the wistful real estate developer Danny Maguire, is a strange choice for a role that requires a strong song ’n’ dance man (Gene Kelly played the part in the film). An energetic ensemble hustles its way through Christopher Rodriguez’ retro-choreography — did I catch an allusion to Shields and Yarnell? God, I feel old — but too much of the dancing (and even acting) seems overly broad, as if sheer exuberance could make up for lack of polish. (Synchronization problems with the small pit band, shunted to the back of the stage, doubtless do not help.) As the evil goddess Melpomene, Mary Marrow contributes very good work as a brassy villainess, modeled perhaps on late-career Judy Garland (or early-career Bette Midler).

Rodriguez also serves as director, and a certainly sluggishness weighs down the production; when I caught Xanadu in NYC (and on tour), it ran a zippy 95 minutes with no intermission. Here, it’s performed in two acts, which slows the momentum; the opening of the second act seems misplaced and unnecessary. The production works best when it finds a groove in the admittedly slight story. The score (largely composed by Jeff Lynne, of the Electric Light Orchestra) boasts a number of familiar, enjoyable tunes, including the barn-raising (or, rather, discotheque-raising) number “All Over the World.” Clearly, the evening’s climax is a goofy rendition of the deliriously dopey “Have You Never Been Mellow,” in which costume designer Kathrine Johnson demonstrates that there’s more to over-the-top ’80s campiness than just hideous tube socks. (And here’s a tip of the sweatband as well to set designer Alfry Valdez for a trip to Olympus on a Pegasus. A neat effect.)

I honestly appreciate that the Playhouse took a chance on something new and oh-so-gay — I mean, next up are A Christmas Carol and Oklahoma, which are neither. (Well, OK, maybe “I’m Just a Girl Who Can’t Say No.” And Dream Curly.) But compared to the Playhouse’s send-up of ’90s boy bands a few years back (Altar Boyz), Xanadu is a mixed-bag that could use more magic. •