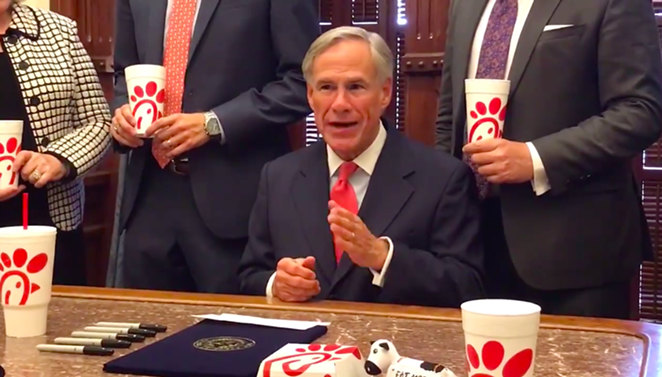 In a Twitter video shared Thursday night, Texas' Republican governor discussed his signing of the so-called religious liberty measure dubbed the "Save Chick-Fil-A bill" while surrounded by people holding cups from the Atlanta-based fast food chain. A Chick-fil-A sandwich box was even prominently displayed on his desk.

“Today I signed the ⁦@ChickfilA⁩ law in Texas. And, had a great lunch," Abbott tweeted. "No business should be discriminated against simply because its owners donate to a church, the Salvation Army, or other religious organization. Texas protects religious liberty.”

The law in question bans government entities from taking “adverse action” against a business based its affiliation with a religious organization. The measure was passed in May over the objection of Democrats, who warned that it provides legal coverage for companies to engage in religious discrimination, especially against LGBTQ+ employees and customers.

Today I signed the ⁦@ChickfilA⁩ law in Texas.

And, had a great lunch.

No business should be discriminated against simply because its owners donate to a church, the Salvation Army, or other religious organization.

Republican lawmakers, however, said the law is meant to stop municipalities from punishing businesses because of their owners' religious beliefs. They cited the city of San Antonio's recent decision to disallow Chick-fil-A from opening an outlet at the city's airport as proof such a law is needed.

San Antonio's council voted 6-4 in late March not to allow the chain into the airport after District 1 Councilman Roberto Trevino cited its “legacy of anti-LGBTQ behavior,” including donations to groups opposed to gay marriage. Some on council warned that the donations flew in the face of the city's nondiscrimination ordinance.

Texas Attorney General Ken Paxton — a Republican and Abbott ally — has since sued the city, demanding it cough up internal communications in which council members and staffers discussed the airport contract.

Last time we checked, however, Chick-fil-A seems to have survived not winning a concession to sell sandwiches at San Antonio's airport.

The chain has four new store openings planned through the end of August, according to its website, which also states that "nearly every week a new Chick-fil-A restaurant opens somewhere across the country."