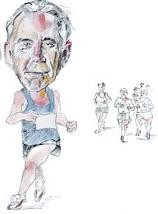 The exact details of Rivard's exit are still unclear (how much can you confidently glean from Twitter?), but by all accounts the announcement by Express-News publisher Tom Stephenson, absent Rivard's presence, to newsroom staff was unexpected. In an email to staff, Rivard gave little indication as to the reason for his departure, saying he wanted a quiet exit “without fanfare," and that "the time has come for new leadership with new energy and new ideas." We've put out a call to E-N public editor Bob Richter for further explanation and to see who will fill Rivard's shoes (see Rivard's resignation letter here).

Rivard has been in San Antonio journalism since the late 80s, joining the now-shuttered San Antonio Light before moving on to the Express-News with a crew of other Light journalists when the Hearst Corporation closed the paper in 1993. He filled the editor post 1997. Throughout his long career in journalism Rivard has garnered numerous awards, authoring a book documenting the death of an E-N journalist in Mexico in the late 90s while also acting a force for free speech and free press at home and abroad.

But, as editor, Rivard has also been criticized for spiking in-house investigative pieces. And earlier this year, in a post picked up by Jim Romenesko's blog at Poynter, former Current editor Elaine Wolff, now of Plaza de Armas, details how Rivard quashed a column by E-N writer Scott Stroud claiming H-E-B stores in San Anto's East Side are in dire need of renovation and stocked with produce and meat the company wouldn't sell in wealthier parts of town. Businessman Lou Miller, a close adviser to District 2 Councilwoman Ivy Taylor, had been fed up that H-E-B had yet to commit to renovating its East Side stores and, after company reps reportedly skipped an East Side economic summit in February, started calling for customers to boycott the company.

In quick back-and-forth with Miller, Rivard wrote: “Scott Stroud’s column about renovation of the H-E-B stores on this city’s Eastside did not meet editors’ standards and thus was not published.

You are free, of course, to campaign against us by asserting without any evidence that we are not publishing what you want us to publish because H-E-B is a major advertiser. I’d suggest instead that we approach any story about H-E-B based on its long-standing and well-deserved reputation in the city, region and state as a best-in-class business, leading corporate citizen, and a company and ownership with an unrivaled record of philanthropy and support for public education in Texas.”

PDA also notes that editor Greg Jefferson, formerly a lead political reporter for the E-N, had his own spat with Rivard over H-E-B coverage while at the paper. In 2010, Rivard pulled a column Jefferson wrote looking at the ties between H-E-B's Charles Butt, banker Tom Frost, and local construction mogul Bartell Zachry and the running of the San Antonio Independent School District. The column ran a week later, with minor tweaking, after Rivard cited the column's "lack of context," including background on the businessmen's philanthropy.

Rivard had floated the idea of leaving the paper last year, meeting with faculty at the University of Texas as one of three candidates [as we wrote about] then being considered for director of UT's School of Journalism. In his letter to E-N staff Tuesday, Rivard said, "As you know, I thought about leaving last year for a position in academia, but ended up staying. This time it’s the right time."  He left no real clues as to what his next step might be.