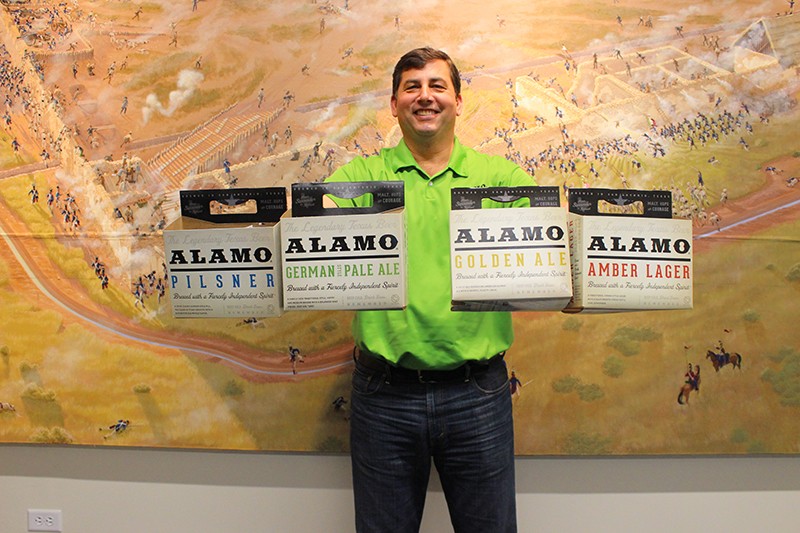 The dust has settled and the doors are finally open to the public at the multi-million dollar brewery we'll soon find synonymous with the downtown landscape. After all, Alamo Brewery is 15 minutes away from its namesake city center. But the road to its opening wasn't an easy one.

Let's bring everyone up to speed. Alamo Beer Company owned by California transplant Eugene Simor, was first brewed in the late '90s, responding to several local breweries closing their doors, including Frio, Yellow Rose and Lone Star. In order to get his beer in Texan hands, Simor teamed up with Brad Farbstein of Real Ale Brewing in Blanco. Through a licensing agreement, Real Ale brewed Alamo Golden Ale starting in 2003. Statewide distribution came in 2009 through boutique distributor Ben E. Keith Specialty Beverages.

It'd be nice to say that once plans for the brewery were laid out, and permits cleared, construction began, but that wasn't the case. In true Alamo fashion, the brewery vowed to "never surrender or retreat" several times over. A lawsuit was filed in 2012 against the city on behalf of the Hays Street Bridge Restoration Group, alleging COSA had no right to sell the land.

Two years, public protests and a confusing jury verdict later, the brewery was built on land already owned by Simor that wasn't part of the original lot in question. The brewery sits at 202 Lamar Street — though the business address is 415 Burnet, and will eventually grow to include 803 Burnet, the future location of a mixed-used facility and restaurant.

Alamo Beer Company opened to the public last week, when the brewery held a celebration of the 179th anniversary of the Battle of the Alamo.

Runners should be familiar with Alamo's bold logo, since it sponsors a slew of races including the Santa Run, Revenge of the Nerds 5K, Gladiator Rock 'N' Run and Prickly Pear Run, to name a few. It's also available at various eateries in town, including The Friendly Spot, Taps Y Tapas and others.

"The main difference between craft-brewed and mass-produced is that craft beer has a face that goes with the product, they have a team of brewers," Simor said of the process of ingratiating themselves in the city. "You're becoming one with your brand. The only way to do that is to go out, meet people, serve beer, talk about beer and have the local folks meet the local folks that run the brewery."

Bob Riddle, owner of Big Bob's Burgers, wasn't familiar with Simor until he started planning the first anniversary of the Hildebrand location.

"Ever since then, he's been at every party, every anniversary, fundraisers for Elf Louise," Riddle said. "He's never said no to anything."

For Denise Aguirre, co-owner of Taps Y Tapas, her continued relationship with Alamo is simple: "Eugene and crew are very supportive and approachable. They actually take the time to get to know us. They support us, we support them."

Simor's also brought more than three decades of experience via his COO, Jim Walter, who previously served in a similar role at Pabst Brewing Co. On the beer side of things, Simor tapped brewmaster James Hudec in late 2013 to bring brewing operations to SA.

During the San Antonio Current's visit to the brewery days prior to the official grand opening, Hudec toiled away in a pair of overalls and rubber boots. The 23-year industry veteran has brewed or consulted for Brenham Brewery, Rahr & Son's, Crescent City Brewhouse and Gordon Biersch Brewery. Hudec, unsurprisingly, is all about traditional brewing methods — no barrel aging allowed.

"I think it's sacrilegious to put a great beer in a whiskey keg," Hudec said. Surly, yes, but his prickly demeanor softened slightly when he started talking about beers. The new offerings, which are being introduced collectively as a family of four, have been an undertaking as San Antonio's signature hard water adds an extra layer of necessary steps.

It might be hard for the brewing process, but the water's had an interesting effect — the usual sweetness is gone and a slight dryness fills the palate. And it still goes down easy.

Area ale lovers can add a visit to the brewery this spring to sample the new amber lager, German pale ale and pilsner inside the 1,800-square-foot beer hall. Hours are 3 to 10 p.m. Thursdays, 3 p.m. to midnight Fridays, 10 a.m. to midnight Saturdays and noon to 6 p.m. on Sundays.

Don't bother looking for Simor if you head over this weekend. The father of four is on a much-needed vacation.

"I feel comfortable doing that now. There's a great team in place to handle this next phase where we open to the public. We just have to live up to our branding of being 'The Legendary Texas Beer.'"