Sunny San Antonio? No End In Sight For Recent Rains 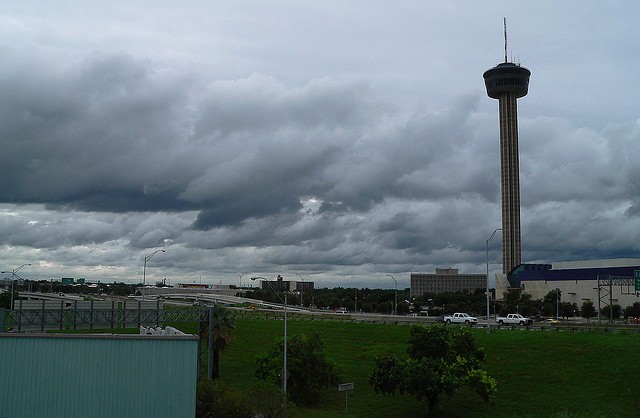 Sick of all the rain we've had lately? I've got some bad news.

Here’s the San Antonio forecast for the next 10 days, according to weather.com:

So what’s to blame for all the rain?


We're in the midst of El Nino, the periodic warming of part of the Pacific Ocean that creates low pressure systems off the West Coast. For the past few weeks, one such system after another has slowly moved east, dumping rain on San Antonio in the process.

San Antonio received almost 7.5 inches of rain in April, making it the seventh-wettest April since 1886, the first year that precipitation levels were recorded for the area.

We’ve got a long way to go to hit the record for May, though. Not including today, San Antonio has received 1.4 inches of rain this month. The record is 14 inches, set in 1935.

According to Nick Hampshire, a meteorologist at the Austin/San Antonio office of the National Weather Service, the amount of rain the city has received lately is “definitely pretty unusual.”

And even though it’s not a record yet, there’s more precipitation to come.

“For the next three months we’re looking at wetter than normal conditions,” said Larry Hopper, another NWS meteorologist.

Which is good news for a region that’s been drought-stricken for nearly five years. Though Hooper said that recent rains haven’t been enough to pull the Edwards Aquifer and the region’s lakes back to normal levels, every drop helps.

Lots of rain in a short period does increase the risk of flash floods though. As the soil becomes saturated, the rain has nowhere to go, and the runoff can quickly breach the banks of creeks. As the downpours continue, so too does the risk of a flood.

"Flash flooding has become much more of an issue," Hooper said.