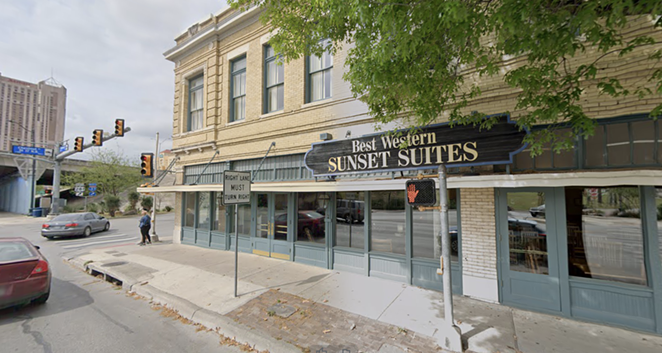 Investors are injecting $5 million into an outdated Best Western property in St. Paul Square to transform it into a trendy boutique hotel, MySA reports.

The east-of-downtown property is on track to open in October, boasting updated rooms and a re-creation of the basement speakeasy that operated in the building during Prohibition, according to the news site. The reno will add another floor to the four-story hotel, boosting the number of rooms to 79 from 64.

The new accommodations, dubbed the Aiden Hotel, will replace the existing Best Western Plus Sunset Suites Riverwalk at 1103 E. Commerce St., a block from the Henry B. Gonzales Convention Center. The hotel was built in 2000, but the area used for its lobby dates back to 1910 and is a San Antonio historical landmark, according to mySA.

Investors told the news site they expect the worst of the pandemic will be over and people looking to travel again once the revamp is complete this fall.

“In 1918, they went through the same thing [the flu pandemic], and by 1920, people were partying so much they had to institute Prohibition,” said Marc Weinstein, one of the hotel's three owners.

The Best Western-affiliated property will remain open during the improvements.

The investor group has tapped Stanley Shropshire, who owns SA's Big Bib BBQ, to run the hotel's food and beverage operations, according to MySA. Shropshire also operates the Big Bib Too concert and special events venue.