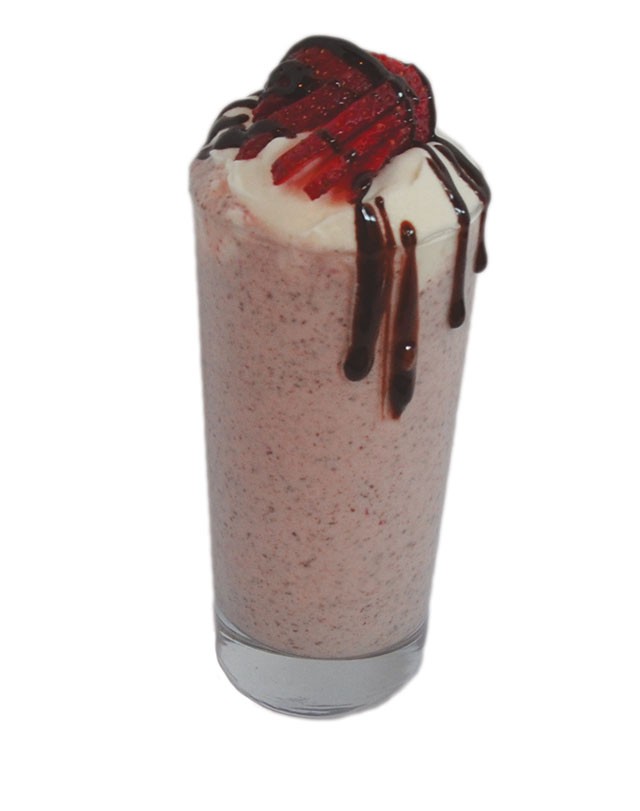 Sometimes Sweet Toof means having to dive deep into the fast food abyss. If Dairy Queen has a stronghold on Texas roadways, then Sonic has the city limits and suburbs covered. And as much as I hate to admit it, America’s Drive-In does have a great lineup of shakes (let’s leave the cone dipping to DQ).

We’ve all given up on our healthful eating resolutions by now … right? Yes? OK. So let’s get our indulgent pants on. We decided to fill the void left in your life during the last few weeks of rabbit food with a one-two punch of sugary goodness by replicating Sonic’s chocolate-covered strawberry milkshake.

I peeked at the nutrition facts of this franken-dessert to make sure we’d make up for at least a month’s worth healthful eating with our experiment: A 10-ounce mini shake would rack up 600 calories (250 of which are from fat) and 100 percent of your daily intake of saturated fat. But let’s be real, who ever gets the mini? A 20-ounce medium shake comes in at 930 calories, while the large is indeed hefty, coming it at 1,380 calories and 41 grams of saturated fat. Yum.

I decided to circumvent a massive guilt trip by replacing soft serve with gelato, which has slightly less fat than ice cream. I suggest springing for Häagen-Dazs vanilla bean for its creamy texture. I also briefly considered adding chocolate gelato instead of vanilla, because YOLO, but decided against it … this time. For the chocolate-covered strawberries, try one of two things: Stock up on leftover Valentine’s Day offerings and gleefully watch them whir into pink sludge, or visit any local chocolate shop that tends to carry a limited supply of strawberries in stock. If you’re a real Martha Stewart you can dip your own damn strawberries, but I’m all about instant gratification so I stocked up on the ready-made variety.

Note: Consistency is up to the creator. For my first attempt, I accidentally blended the mixture a little too smoothly. If you’d still like to find and chew on strawberry-choco chunks, feel free to pulse the milkshake instead.