There hasn’t been a shortage of strong female characters portrayed on the big screen this year. From empowered ensembles battling hybrid beasts in Annihilation and running heists in Ocean’s 8 and Widows to smaller, individual offerings like the coming-of-age narratives in Wildlife and Puzzle, Hollywood seems to have finally started to embrace the notion that women, too, have fascinating stories to tell.

This week in San Antonio, four new films — three theatrical releases and one on Netflix — will help continue to push the momentum forward for female-centric cinema as we move into 2019. The Current has seen and reviewed all four. 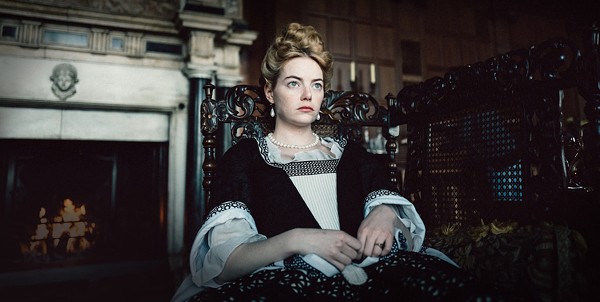 The Favourite is unlike any costume drama you’ve ever seen. That includes filmmaker Sofia Coppola’s imaginative and underappreciated 2006 hipster biopic Marie Antoinette, where she uses the song “I Want Candy” in the soundtrack and sneaks a pair of blue Converse into one scene.

It shouldn’t come as a surprise if you know the eccentric and invigorating work of Greek writer/director Yorgos Lanthimos in films like Dogtooth and The Lobster, the latter of which earned him an Oscar nomination for Best Original Screenplay in 2016.

Although Lanthimos hands off script duties for The Favourite to Australian TV writer Tony McNamara and first-time writer Deborah Davis, who penned the initial screenplay over two decades ago, his fingerprints are all over it. The Favourite is an acerbic and abrasively funny period piece featuring three of the best female performances of the year. The film is like a formal curtsy but with a sharp knee strike to the groin.

Set in the early 18th Century, The Favourite is loosely based on the reign of Queen Anne (Olivia Colman), the sickly crowned head who ruled Great Britain and Ireland until her death in 1714 at the age of 49. Don’t expect a history lesson here, however. Lanthimos isn’t as interested in the Restoration of the English Monarchy as he is the darker and comically absurd relationships Anne develops with her close advisor Sarah Churchill (Oscar winner Rachel Weisz), and Sarah’s cousin, Abigail Hill (Oscar winner Emma Stone), who is hired to work in the scullery.

When Abigail proves herself to be more than a servant, her and Sarah’s political posturing comes to a head as they find themselves vying for Anne’s attention. With a kingdom’s power at their fingertips, Sarah and Abigail become the year’s most intriguing adversaries as they cut each other down at every turn in an attempt to keep their high-end status from waning.

At times voyeuristic in nature, Lanthimos uses a camera lens that allows moviegoers to witness the debauchery unfold as if we are peeking through a palace peephole. In The Favourite, hostility and deceitfulness have never been this wickedly entertaining. 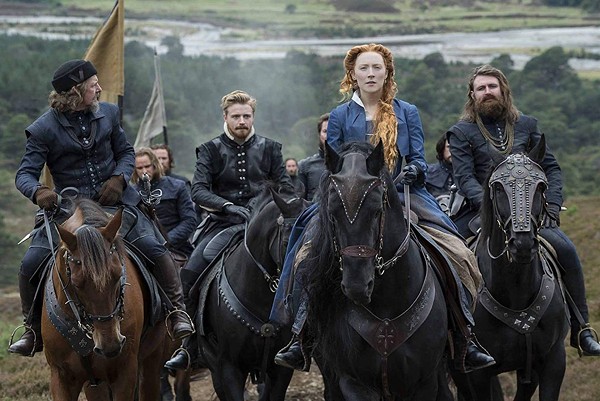 Like The Favourite, Mary, Queen of Scots features its own interesting archrivalry between two women scheming for a monarchical power grab. As a historical biography, MQOS is much more conventional than Yorgos Lanthimos’ aforementioned film, but its sprawling storytelling about women in authoritative positions gives the picture its own sense of 16th-century political wokeness, which is notable in any era.

Helmed by first-time feature film director Josie Rourke, whose background is largely in theater, MQOS tells the story of Mary Stuart (three-time Oscar nominee Saoirse Ronan) who arrives in Scotland to reclaim her throne after the death of her husband, the King of France. She is met with masked contempt by her cousin Queen Elizabeth I (Oscar nominee Margot Robbie), who rules over both England and Scotland and isn’t about to relinquish authority to anyone.

Political maneuvering involving Mary and Elizabeth begins as they attempt to decipher what angle the other is playing to get what she wants. With her sovereignty in jeopardy, Elizabeth pushes back when she sees her cousin gain standing, especially since Mary is able to give birth to an heir and Elizabeth is not. The dynamic is a fiery one, even though Ronan and Robbie don’t share the screen until the film’s final act.

There is a lot of history to unpack in MQOS and these details are being questioned by historians. Some argue the queens were never on friendly terms, as depicted in the film. Others point out that Mary didn’t have an Irish accent like Ronan’s natural one. And the meeting the rulers have at the climax of the film? It never happened, although it does make for compelling theater.

It’s easier for a period piece like The Favourite to call itself a farce and get away with taking more creative license. For MQOS, there seems to be less leeway for purists who had problems in the past with films like 1971’s Mary, Queen of Scots or 2007’s Elizabeth: The Golden Age. If you can overlook some of the historical inaccuracies and the occasionally sluggish narrative, MQOS has a lot to say about the rise of women in a male-dominated world.

There’s no denying the beauty and timelessness at the heart of Academy Award-winning director Alfonso Cuarón’s deeply personal drama Roma. It’s as close to cinematic poetry as you can get, and Cuarón, with an expert-level attention to detail, places us at the center of his story — watching, listening, waiting, and cherishing every delicate moment.

As with all his past films — whether taking audiences on a road trip through rural Mexico in his 2001 masterpiece Y tu Mamá También or floating through the vastness of space in 2013’s Gravity — there is an intimacy in Cuarón’s work that is unlike any director making films today. It’s never been more apparent just how meditative his voice has become than with Roma, an autobiographical film based on his childhood in Mexico City during the 1970s and told from the perspective of the woman who helped raise him — his nanny Libo. (Yalitza Aparicio plays a fictionalized version named Cleo.)

In Cleo, Cuarón has created a character of pure devotion and human spirit, and Aparicio delivers a restrained, albeit passionate, performance. In Roma, Cuarón examines Cleo’s relationship with the middle-class family who employs her and the complex social dynamics that keep them separated. In comparison, Brazilian filmmaker Anna Muylaert’s 2015 film Que Horas Ela Volta? (The Second Mother) does a better job presenting this theme, but Cuarón’s emphasis on a single character’s experiences is admirable as we observe Cleo not only performing tedious tasks but also comforting the children who are witnessing the dissolution of their parents’ marriage.

From a technical standpoint, Roma is second to none — from Cuarón’s brilliant direction and first foray into the role of cinematographer (usual collaborator Emmanuel Lubezki was not available) to the meticulous production design by Academy Award winner Eugenio Caballero (Pan’s Labyrinth). The black-and-white 65mm film Cuarón utilizes gives an epic feel to the picture, and his tracking shots reveal a landscape full of life that is oftentimes overshadowed in other films by the shiniest object in the room. Instead, Cuarón makes the ordinary seem remarkable — soapy water gliding over a stone floor, laundry hanging from a clothesline, a lizard scurrying across the dry earth.

Appreciate what Cuarón has constructed with Roma. Like other recent image-heavy films such as Tree of Life, Dunkirk and The Revenant, what Roma lacks in standard narrative substance, it makes up for in Cuarón’s skill as a visual storyteller.

Roma is available on Netflix December 14.

Pop star Celeste Montgomery (Oscar winner Natalie Portman plays her as an adult) is doing everything possible to control her own destiny. She’s been doing so ever since tragedy struck when she was a teenager and despite the fact that her life may already be primed for a “predetermined destination.”

The setup to the satirical drama Vox Lux by actor-turned-director Brady Corbet (The Childhood of a Leader) is strange and hypnotic. As a devout teen, Celeste (Raffey Cassidy) survives a school shooting and later uses the experience to launch a successful career as a musician.

If the idea sounds a bit preposterous, it’s probably because Corbet means to say something contentious about the culture of celebrity in the 21st century. These days, all it takes to become famous is to create a YouTube channel or star in a sex tape or play a villain on a reality TV show, so why wouldn’t the same thing happen to a young girl who is shot in the head and decides to write a song to help ease her pain? Let’s be honest. Is it any more unbelievable than cast members from The Real Housewives or Teen Moms trending on Twitter?

In Vox Lux, Corbet introduces audiences to Celeste as a young girl — a girl “not all that special or conspicuously talented” — coming to terms with her newfound fame alongside her supportive sister Ellie (Stacy Martin) and unnamed manager (two-time Oscar nominee Jude Law). Her character arc during these formidable years is captivating — evolving from an innocent performer into a mainstream sellout.

Divided into two acts, we meet Portman in “Act 2: Regenesis” as a seasoned and cynical 31-year-old superstar raising her daughter Albertine (also played by Cassidy) in an industry she loves and despises for different reasons. When another tragic event takes place halfway across the globe that is connected to one of Celeste’s music videos, she is forced to reevaluate the circumstances that brought her to a place where fantasy and catastrophe go hand in hand.

Ambitious to a fault, Vox Lux feels otherworldly. Corbet still has a long way to go as a filmmaker, but it’s inspiring to see someone take risks so early in their career.