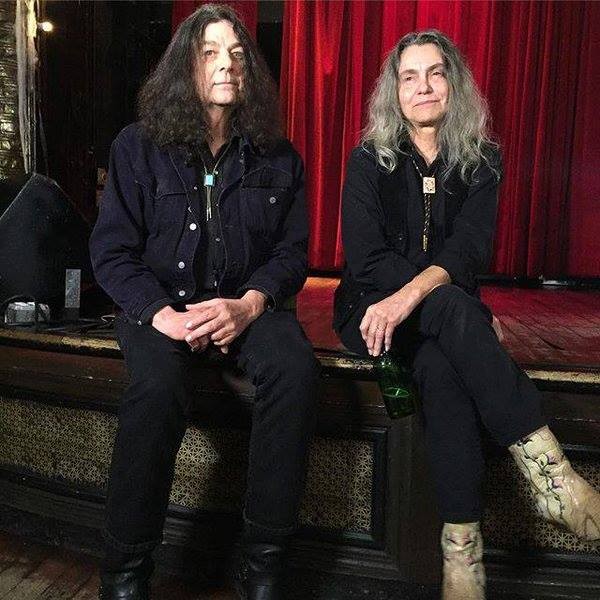 Fred and Toody Cole are punk legends and American DIY icons. For over 40 years the couple have relentlessly toured the globe playing their raw stew of rock 'n' roll, punk and country as The Rats, The Range Rats, Pierced Arrows and most notably Dead Moon, to name a few. We recently got to speak with Toody over the phone from the Cole's house in Clackamas, Oregon.


You and Fred have been making music and touring the world for decades now, and doing it entirely on your own terms.


Do you ever see yourselves stopping or slowing down?


Well we are definitely slowing down. I mean at this point that’s why we’re doing the duo. It’s just really become too much and too hard on Fred to be up on stage for you know an hour to two hours with a 25 pound guitar around his neck and rocking out. So we played the Crystal Ballroom again this year as Dead Moon with our pierced arrows drummer Kelly Halliburton. At this point yeah, that’s probably the last, you know, rock 'n' roll show we’ll do.


We’re both really loving doing the duo and spending our time together and just kinda basically doing it really on our own terms where we don't have a drummer and a merch person and a this and a that to worry about and to be carting around in the van. We bought a really old Mercedes Turbo-Diesel which we really love and it's cheap on gas and it's way cool and it was inexpensive to get and it holds a ton. We just get in that and go at our own pace. So we’re looking to leave early and make a few pit stops and take our time and you know make it easy on ourselves and have a working vacation. It worked out amazingly cool so that's our thing for the future I think.


Yeah, he’s been having problems for the last three years. In 2014 he had to have triple bypass surgery, open heart. We were doing a Dead Moon show in Seattle at Bumbershoot just this labor day weekend and he went down. The paramedics had to zap him back a couple of times. He didn't have a heart attack but his heart went out of rhythm. Now he has implanted a combination pacemaker and defibrillator which will automatically shock him no matter where he is and save his life. So yeah, haha, he’s seen his fair share of bullshit.


Besides the numerous bands you and Fred have run a record label, a music shop and a general store.


Fred and I have been doing music stores for 30 years. After the end of one of  the Dead Moon tours, I think in '04 or '05, we just closed it down. Guitar Center had gone up the street a few years earlier and they pretty much just put everyone under the ground that was doing small business. It was boring, honestly. Since the internet has come in you don't get any cool trade-ins, it's not fun like it used to be. It’s just reselling the same stupid guitars over and over again, nothing new and nothing exciting. So, we let that one go and at one point we sold the little convenience store Tombstone General. That's still open and operating, just different owners.


We’re not even really doing much with the label, but I was just thinking about doing some recording with just Fred and me, just for the hell of it. I don't know if we’ll ever release it or not.


Can we expect any new material on this tour? Or perhaps an old Range Rats tune?


We’ve got 2 or 3 songs that probably nobody down there has heard. One of them is actually a song that Fred wrote when he was 19. But it's new material to whoever hasn't heard it before. He’s working on a few other new ones but some of those we don't have completely ready for the public yet. And he's working on kinda changing a couple traditional Dead Moon songs to suit more of what we’re doing.


We haven’t worked up any of the Range Rats stuff yet. We’re doing some of the Rats stuff, some Pierced Arrows and some Dead Moon, but the Range Rats is still my favorite album. We listen to it all the time. But you won't believe how difficult that stuff is to play. I can't believe we ever got that together and recorded it. It's a real bear to be doing that stuff, playing and singing at the same time. It’s really magical stuff. I wish we could do it. I keep talking about it but Fred keeps going “Ah, man!”


Kelly really wants to do a third record and, I don't know, we haven't completely nixed that yet but we had several songs that we were working on for a new album and actually got them recorded but Fred was never happy with the way they came out so I don't know whether that will ever happen or not.


We’re really looking forward to coming back to San Antonio. We were talking about it last night and I know Dead Moon used to play there. We used to play down there with a local band at some dinky club, I keep thinking Green Onion but I’m not sure if that's the name of it, but it's a long, long time since we’ve been down there and I'm really happy to see something where we’re able to add it back to the schedule.

Fred and Toody will be playing a stripped down acoustic set at Paper Tiger on Tuesday, March 8. Doors open at 6 p.m. and tickets are available here for $8.
Check out our playlist of Fred and Toody-related bangers below.