Tall Order: San Antonio Restaurateurs Are Forging Ahead on Expansion Plans, Even As the COVID-19 Crisis Continues

It’s always been hard to open a restaurant in San Antonio. Ask any local chef.
But opening a new restaurant in the middle of a pandemic is uncharted territory.

Since March, the COVID-19 crisis has forced nearly 12% of the state’s food and beverage businesses to permanently close their doors, according to the Texas Restaurant Association. That number — all but certain to rise — is more than daunting for entrepreneurs undertaking openings or openings before the pandemic hit.

When chef Ming Qian launches her second restaurant, Ming’s, it will open this month to a changed dining landscape. Like many local restaurateurs, her business plans were disrupted by the novel coronavirus, but the costs that come with a new business — payroll, rent, construction — haven’t gone anywhere.

Qian had no choice but to forge ahead.

“If we weren’t opening during COVID-19, I’m sure that opening Ming’s would have been like any other new restaurant — we’d be able to count on a honeymoon period and have the place jam-packed for weeks,” she said. “Now, I don’t know what’s going to happen. Everything is unknown, it’s scary.”

Qian introduced San Antonio to her authentic Asian noodle dishes and bao via a self-named pop-up at the Pearl farmers market back in 2011. After gaining a following, she launched a successful catering company and opened Ming’s Noodle Bar in Olmos Park during 2016.

As sales continued to grow, she looked for new opportunities to expand her footprint, signing a lease for her second restaurant in 2019. She planned to open the East Elmira Street location the following spring.

Then COVID-19 hit Texas in March, and the economy came to a screeching halt.

Orders from Texas Gov. Greg Abbott and San Antonio Mayor Ron Nirenberg forced local bars and restaurants including Ming’s Noodle Bar to close for everything but delivery and takeout. Dining spots across the state closed their doors, some permanently, and thousands of hospitality workers were furloughed or fired.

Qian’s paused work on her new restaurant for several weeks before resuming construction. The spot is now on track for a June soft opening and a grand opening event in July.

“But of course, that could all change,” she said. “Things are changing every day.”

Despite the public’s eagerness to return to restaurants for hospitality and a sense of normalcy, one thing is clear: the pandemic is far from over. The number of COVID-19 cases in San Antonio is spiraling upward, and with it comes high unemployment rates, dwindling revenue and devastating economic losses for Texas restaurants.

Texas is projected to lose up to 30 percent of its restaurants and food businesses due to COVID-19, according to the Texas Restaurant Associations’ analysis. What’s more, Abbott issued his first order throttling back the state’s reopening, closing bars again and reducing restaurant occupancy from 75% to 50%.

In response to the statewide industry crisis, the TRA has released the Texas Restaurant Survival Plan, which aims to secure additional funding, enact necessary policy changes and provide support to restaurants affected by the pandemic.

Working with industry leaders and health officials, the TRA has also developed the Texas Restaurant Promise, a set of business and customer guidelines that include social distancing, hand sanitizing, and disinfecting spaces. The guidelines have been updated to reflect input from Abbott and his team.

“There’s definitely going to be some changes to the way we do things,” Qian said. “I don’t think restaurants will ever go back to the way they were before.”

Within days of San Antonio’s mandated restaurant and bar closures in March, many businesses successfully pivoted to offer delivery, takeaway and curbside service. But for James Moore and Blade Haddock, the restauranteurs who launched seasonal American restaurant Full Belly Café & Bar in February, there simply wasn’t enough time to adapt.

“The restaurant was so new that we didn’t have time or a way to sustain new services like delivery and takeout,” Moore said. “It was somewhat traumatic to close, even temporarily. I’ve obviously never been a part of anything like this, and I’ve opened a half-dozen restaurants. I still shake my head in disbelief that this is happening. But if we can get through this, there’s nothing we can’t do. “

Even though Abbott had relaxed restaurant occupancy rules until his most recent order, the Full Belly team is wary of opening too early.

“We can reopen once. We can’t afford to reopen several times,” Moore said. “We can’t afford to shut down for several days at a time to disinfect and deep clean, so it’s essential to have the best practices in place.”

Using the Texas Restaurant Promise, Moore and Haddock have been developing strategies and practices to create a safe, welcoming environment for staff and customers despite the ongoing pandemic.

“Outside of medical offices, restaurants should be one of the most sanitary places to be right now,” Moore added. “We’re working to make that happen and to providing a fun experience for people as well.”

Moore hopes to reopen the restaurant’s indoor and patio seating to the state’s fully allowed capacity in late July, but that could change. His team has been waiting and watching, because they don’t want to contribute to the already worsening curve.

“The writing is on the wall,” he added. “If we don’t reopen at some point soon, then we’ll never reopen.”

Just as restauranteurs look to organizations such as the TRA for reopening guidance, small businesses are seeking financial assistance to help make up for lost revenue, departed staff and rising operational costs.

Even after receiving a federal Paycheck Protection Program loan in early June, Qian estimates that her businesses have lost nearly $100,000 in revenue since March. That’s added up through lost catering gigs, cancelled farmers market appearances and reduced dine-in service.

Even so, she remains optimistic about the future and finding new customers.
Qian’s newest restaurant, housed inside an airy retail space at Midtown Station, will focus on Southeast Asian-inspired dishes that combine the region’s cooking traditions with a Texas flair.

Although Qian plans for the food to be fine-dining quality, she’ll use a fast-casual ordering system so patrons can minimize contact with servers. The restaurant will also include a newly designed open kitchen that offers ample space for staff to maintain social distance. The mix of indoor and outdoor seating is also designed to meet current state standards.

“This time has been really tough for us, and for restaurants everywhere, but now I think it’s getting better,” Qian said. “Customers are coming back. I think people are ready to go out again.”

Steps away from the new Ming’s location, husband-wife team Keith and Alex Simpson are preparing to open their second Squeezers Co. juice bar. After establishing the concept in McAllen, the couple brought it north to San Antonio in 2017.

Even during the COVID-19 crisis, the Simpsons’ existing shop managed to find new customers, so they’re hopeful the interest will carry over to the new shop, which will specialize in healthy juice cleanses, wellness shots and smoothie bowls.

Though the pandemic pushed back the original opening date, Squeezers Co. is expected to welcome customers in the coming weeks.

“Growth was always part of our business plan,” Alex Simpson said. “COVID-19 changed everything, but I think people need places like us more than ever now. The most rewarding part of being in this kind of business is just hearing our customers tell us how we have improved their life in one way or another. And that’s why I can’t stop. We can’t stop.”

The couple implemented strict cleaning requirements for their staff, requiring employees to wear masks and gloves while working — even before the recent local order required it. Workers take hours each day to clean, disinfect and prep before the shop opens.

Unlike most food businesses in San Antonio, Squeezers hasn’t furloughed its staff. The team kept busy during the pandemic, giving away wellness shots and health products to needy populations at the Haven for Hope shelter. 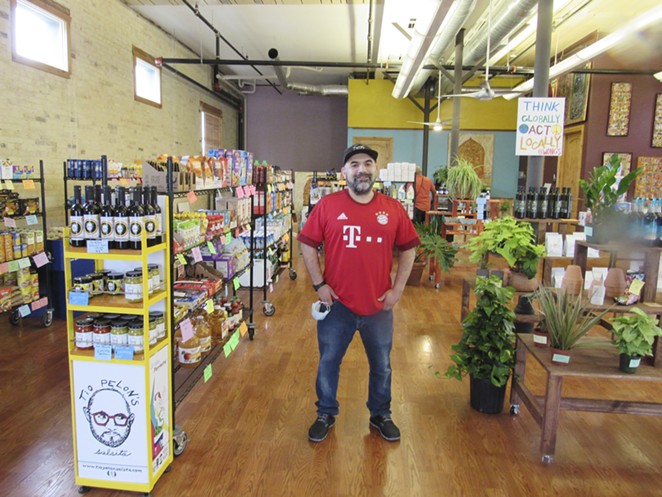 While COVID-19 has required virtually every business to adapt to the new normal, many local food entrepreneurs had to completely rethink their business models under the unprecedented circumstances.

Raul Martinez-Salinas was preparing to launch a new vegan-friendly shop inside the historic Wong’s Bodega building when the pandemic hit San Antonio in March. After seeing the Southtown community struggle to find basic supplies, he decided to open the bodega for online-reservation shopping in early April.

“The whole purpose of this bodega was just to be an asset to the community and give them healthier options,” Martinez-Salinas said. “We were going to be a vegan- and vegetarian-only store, but we’ve expanded our products to offer the essentials — meat, dairy, eggs, cheese — that people really need right now.”
For those living in the 78204 ZIP code, curbside groceries at Wong’s Bodega became a godsend, especially since the closest H-E-B with curbside service is more than three miles away.

The opening of Wong’s Bodega looked different than Martinez-Salinas expected, but he’s excited to work with area wholesalers and local farmers to bring fresh and affordable food to the area.

“We opened it up to help people, and what better time than right now?” he said.

Indeed, as the restaurant industry rebuilds, so will the economy, said Emily Williams Knight, TRA’s president and CEO.

“We just have to remember that until recently, the restaurant industry employed 1.3 million people — more than 40% of our employees are minorities,” she said. “Restaurant and hospitality businesses have been hit harder than any other industry during COVID-19. We’ve already lost so much. We need to get people back to work, safely, and we need to get the population back to work.”

Opening or expanding a restaurant today requires a new approach to business and a major adjustment to expectations, owners say. While the number of restaurants may dwindle as the crisis drags on, the demand for quality dining experiences and hospitality remains.