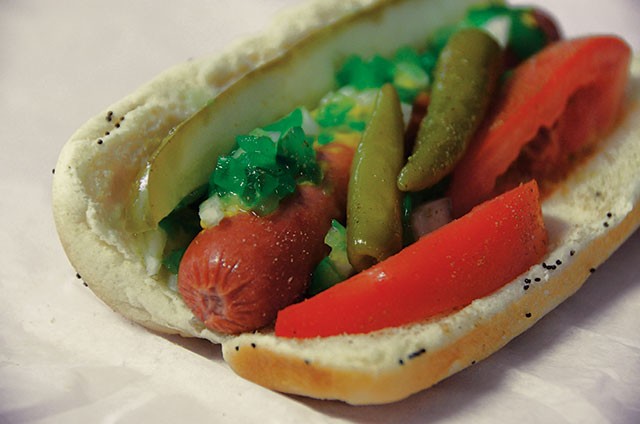 If you’ve ever been to Chicago, you know why the term for flashy styling in the surfing world is “hotdogging.” If you’ve never been, get yourself downtown to Jerry’s Chicago Style Hot Dogs and find out why. Not just a weiner, this dog is done up to Windy City specs personally by a Chicago native, and carries a carefully chosen entourage of supporting players to spice up the Kosher frank in a poppy seed bun. Known as “the dog with a salad on top,” a true Chicago dog is said to have been “dragged through the garden” and is equipped with yellow mustard, neon-green relish, sport peppers, tomatoes, Kosher pickle spears, and dash of celery salt. It’s a time-honored recipe that traces its roots to the Maxwell Street Market, where a “Depression Sandwich” was sold for a nickel in the 1930s.

Now largely occupied by parts of the University of Illinois at Chicago, the Maxwell Street neighborhood, located on the city’s Near West Side a few blocks away from Chicago’s Little Italy and Greektown, was settled by Eastern European Jews in the late 1800s and became a destination for African Americans leaving the South for employment opportunities in the 1920s. The Chicago blues grew up there, and a true Chicago dog is made from a Kosher frank. The neighborhood also gave birth to the Maxwell Street Polish, a sausage sandwich almost as renowned as the city’s eponymous hot dog. You can get them at Jerry’s, too, as well as chili dogs, corndogs, and an assortment of other deli treats.

But we go for the dogs, on which everything except the tomatoes is imported from Chicago. So yeah, it’s authentic. You can order and eat at the counter (the better to get seconds, quick) or mosey into the adjourning dining room, where you’re likely to encounter a couple of the regulars shooting the breeze. Like any legit hot dog stand, Jerry’s provides sustenance for the body, a hideout from sun or rain, and a place to rest your weary soles on an urban trek. Asked how he got in the business, Jerry, the owner, told us, “I’ve always liked hot dogs.” Doggone best reason we’ve heard for taking a job. We’re just glad he’s good at it.