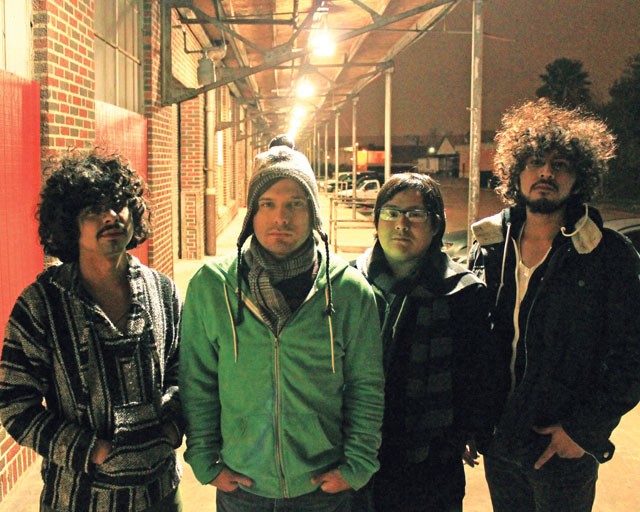 By the second track of Tax the Wolf’s debut album, Hold the Sun (2010), you’ll likely be dialing through the recesses of your musical catalogue for a touchstone, searching to compare them to any number of abstruse musical rarities (without skipping Radiohead along the way). This indie Latino lovechild chosen by the readers of the Houston Press as Best Progressive Rock Band last year is ready to leave the nest. Come July, their psychedelic sounds will be rippling outside of Texas proper as they speed out for the West Coast.

“This is our first [major tour] so we’re not expecting to become the next big act in [any] town or anything like that,” laughed bassist and lead vocalist Mario Rodríguez, speaking to the Current last week. Yet, with few shows outside of Houston under their belt, they’re starting to get noticed in surrounding cities, including inconspicuous Beaumont. “It’s quite interesting,” said Rodríguez, “I don’t understand it. … We’ve only played there twice. The first time we went, there was a huge audience, and the second time it was even bigger! They even gave us a place to stay and some food.”

Set your beans to boiling, San Antonio and Austin. You’re next.

With its melodic, bilingual mix of Pink Floyd-meets-Mars Volta progressive psychedelia, straight-ahead garage, and unexpected chord changes, Tax the Wolf may be one of the most exciting, exploratory bands to hit the regional circuit. And even though Hold the Sun is a solid album, the band is at its best in concert.

“It’s a different experience,” Rodríguez said. “We incorporate a lot more heavy rock in our live show, while the album sounds a lot more melancholic. In our live show we somehow still capture that, mainly because of our guitarist [Alan Garza]. He likes to keep that ambience going, but aside from that [we] really try to put on a good rock ’n’ roll show aside from sounding very progressive and dreamlike.”

Still not convinced of the cosmic leaps these guys take across the genre galaxy? Aside from cranking out modern rock melodies that serve as a foil to the music’s celestial undertones, Tax the Wolf has announced a collaboration EP due out in July with hip-hop duo Juzcoz. “What we’re aiming for is to have classic hip-hop mixed with rock ’n’ roll, but at the same time make it very friendly, very fresh, and really catchy,” said Rodríguez.

The quartet asked their Twitter followers recently what makes a song timeless. We put the question back on Rodríguez.

“I think what makes a song timeless might be writing a song at the right time and putting a lot of what you love into it. If you do it in the right manner, at the right time, towards the right group of people, I think the actual audience can make that song timeless. Us, the listeners, make songs timeless. It’s still something I’m trying to figure out. Now with the [the state of the] music industry, it’s very difficult to be one of those types of musicians. I have yet to hear a modern artist doing something like that.” •