Taylor Kitsch Proves Looks Aren’t Everything in ‘The Grand Seduction’ 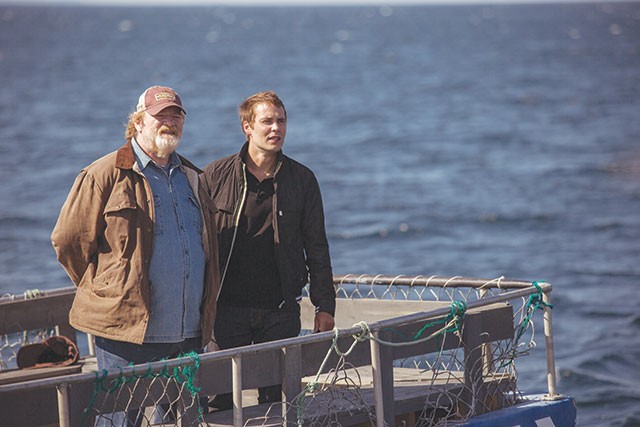 The Grand Seduction is cute and smart and loves its characters, but one thing will nag at the back of your brain over and over throughout viewing it: Why would anyone want to hire a doctor who’s as dumb as Dr. Paul Lewis (Taylor Kitsch)?

Sure, the town at the center of The Grand Seduction is desperate for a doctor in residence in order to get a big-swingin’-dick factory built so that jobs will return to the area and the locals can stop living on welfare. But Lewis is a bona fide dum-dum. How else can you explain bringing enough cocaine to kill a bull elephant through Canadian Customs? Or an American loving cricket? Or that he’s never suspicious of finding exactly the same amount of cash in the same spot each night as he walks home from the bar?

Any audience member will have to make a choice to throw in and go along with the scam—the grand seduction, if you will—at the center of The Grand Seduction. The whole thing is so cockamamie that to look at it through the lens of normal suspension of disbelief is a fool’s errand, much like the scam itself.

Tickle Cove is a once-robust, now dilapidated, fishing village north of the border. The men were once fishermen, and the women, whatever they used to do, are tired of caring for the depressed men.

There is a glimmer of hope. A large oil company is in trouble with the Canadian government, and to make amends for some kind of toxic dumping (or something equally reprehensible), they’ve agreed to build a refinery in a small town. Tickle Cove wants to be that small town because a refinery equals jobs. But because factories are a place where workers can lose an arm or a leg or a life, the Canadian government and the oil company agree that a doctor must reside in the town where the factory is constructed.

Unfortunately, Tickle Cove has no doctor. But necessity (and Frank Zappa) is the mother of invention, and Murray French (Brendan Gleeson, delightful in a light role) has an idea: Trick a doctor into falling in love with their town, get him to move there permanently, and then sign the papers with the oil company. Then everyone earns money, and all the men get laid (that rather crude subplot is played for laughs, but it’s decidedly tacky in an otherwise gentle film).

Enter the coke-snortin’, cricket-playin’ Dr. Lewis, who gets nabbed at the airport for possession en route home to New York after a huge cricket tournament (why not?). It just so happens that the former mayor of Tickle Cove is working in customs, and he pulls some strings—how, at an entry-level position, is never explained—and Dr. Lewis is stuck in Tickle Cove, population Jack Shit, for 30 days.

The Grand Seduction wants to be a screwball comedy, and it has elements of that, but there’s an undercurrent of sexism in it—Murray feels abandoned by his wife when she takes a job “in town,” but he’s too proud to follow her there, though it’s played off as his love of Tickle Cove. Plus, and, this bears repeating, Dr. Lewis is downright stupid.

But this is a movie, and movies need something to thrust the narrative forward. One man’s stubbornness and one man’s apparent lack of smarts is as good as anything, I guess. Murray gets the local banker to go in with him on the gag, and he cons the switchboard operators into listening in on Paul’s calls (no cell service, natch), and before long they’re seducing the hell out of this guy with an M.D.

And really, who gives a shit if Paul’s stupid? He can wield a scalpel, and he genuinely begins to care for the residents who don’t have regular medical attention. Plus, he’s better than nothing, even if his specialty back in New York is cosmetic surgery.

The conceit at the cynical heart of The Grand Seduction is laced with sugar (and not a little bit of cyanide). Let’s face it: If this story happened in real life, there would be lawsuits and prison time and lots kicking old dudes in the nuts for retribution.

However, it’s surprisingly sweet. Despite the absurd premise and the hiding-behind-buildings and lies-upon-lies gags (the bit when Murray makes the town’s 150 people look like 300 is funny, if hackneyed), it’s all done with such good humor, you can’t help but smile. There’s even one character, Kathleen (Liane Balaban), who acts as audience surrogate; she won’t take part in the shenanigans and therefore takes the curse off the silliness.

Make the decision to have fun, and The Grand Seduction will be fun. Just don’t let someone who looks like Taylor Kitsch be your doctor. The guy’s an idiot.