TBA is a Well-kept Secret (for Now) 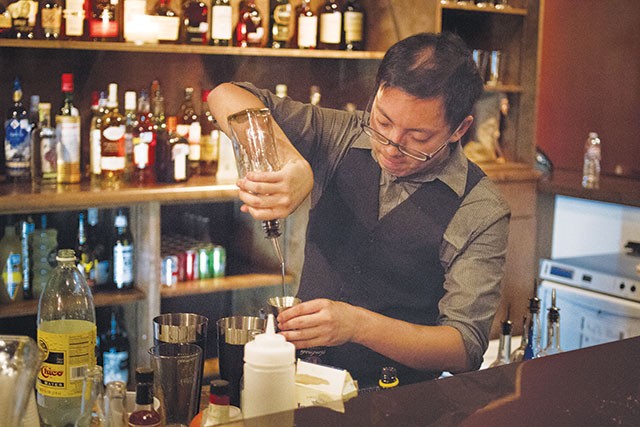 Admittedly, TBA is behind schedule. Signage is still in the works. The small plates that chef-owner James Moore promised are still in development (and should be ready to go by this week). Décor is in the process of being hung.

That hasn’t stopped a slew of regulars from socializing and nursing a few cold ones during the past month since TBA opened its doors in the space formerly known as Saluté.

But Saluté is dead and gone. A facelift that involved a robust shade of burgundy, a revamped bar and a build-out of a new ladies-only restroom (we hate sharing), is enough to make you forget even your fondest memories of the late bar. Framed mirrors hang on just about every wall, giving the illusion that the 1,000 square-foot watering hole might be bigger than it really is.

Opened by Moore and property owner Casey Lange (of Limelight, etc.) in July, TBA was designed as a neighborhood bar for folks to grab a drink and relax. It joins Joey’s, The Mix, the newly opened Faust Tavern, the Brass Monkey and Hi-Tones on the St. Mary’s Strip. But there’s something to be said about a bar where the bartender actually dotes over you on weeknights—and it’s not just any barkeep. Jonny Yumol, formerly stirring and shaking at The Esquire Tavern and Nao New World Flavors, created the cocktail program and drink menu at TBA alongside Moore, both taking a culinary approach to cocktail making.

TBA is Moore’s first brick-and-mortar venture as owner. The former executive chef at Max’s Wine Dive, who most recently opened Boiler House Texas Grill & Wine Garden at the Pearl, is having fun concocting infusions such as the figgy bourbon used in the Fig Fashion and the serrano-and-cilantro-infused tequila used in the now-signature Juan Collins (“Down the Hatch,” July 17-23.)

“We’re looking at what’s fresh and what we’ve got on-hand,” Moore noted, “everything is [made] in limited batches; once something’s out of season, we move on.”

Yumol, for his part, is bringing six years’ worth of bartending experience in both speed and cocktail bars to the table.

“I want to put a lot of thought and quality into the cocktails,” Yumol said, adding “but I don’t want people to be intimidated.”

They won’t be. The menu, which has changed thrice since the grand opening, features six $7 libations (a personal favorite was the Filibuster, a carnation pink drink made with watermelon gin, Aperol, lemon and Prosecco, TBA’s ode to Wendy Davis’ mid-summer nationwide political debut); cheap beers like the hipster-ific PBR and Lone Star, local ales such as Shiner and Alamo, and a selection of brews from Stone Brewing Co., Chimay and Jester King; oh, and 15 wines available by either glass or the bottle.

The food program is the pièce de resistance for Moore who’s been as hands-on as you can get with a new project (his boxer pup has made the occasional appearance at the bar). The menu’s been in the R&D phase since Moore left Boiler House in March, but a lengthy build-out put snacks on the back burner. With the bar’s identity almost in place, Moore is hoping to add grilled cheeses, some charcuterie, “things on sticks and skewers,” playful reinterpretations of classic bar food (yeah, that might mean pickled pig’s feet) and homemade custards and aoilis—all prepared during the day and plated at the bar since there is no kitchen.

Even without the food program, the appeal of TBA is that, at least for now, you’re not squeezing your way to the front of the bar to flag down a bartender. You’re getting excellent service while whetting your whistle on a solid selection of hooch and brews in a comfortable space that echoes Moore and Yumol’s laidback vibe.

“One of the first things people would notice is that I’m bartending in a shirt,” Yumol notes, as opposed to the fancier duds now so common for cocktail crafters. “I’m used to wearing it and it feels good. Besides, it’s 100 million degrees out.”