Teachers in Other States are Striking. Texas Teachers Can't Do That. 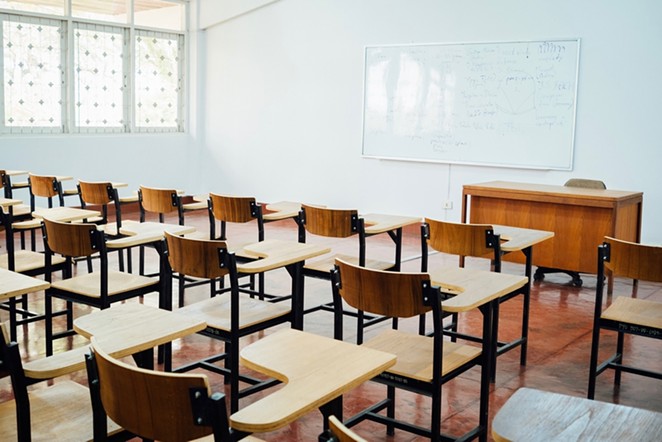 This story was originally published in The Texas Tribune.

Teachers in states across the nation are going on strike to protest funding cuts for public education. But a Texas law is quashing talk of teachers here joining the walkouts.

The statute says any employees who "strike or engage in an organized work stoppage against the state or a political subdivision of the state" will lose all their "civil service rights, reemployment rights, and any other rights, benefits, and privileges the employee enjoys as a result of public employment or former public employment."

While supportive of the movements happening in other states, several Texas teachers associations are encouraging their members to refrain from leaving their classrooms and going on strike. Doing so, advocates say, could result in having their teaching certificates and Teacher Retirement System benefits permanently revoked.

“Teachers in Texas have a pension," said Paul Tapp, the managing attorney for the Association of Texas Professional Educators. "That’s a benefit that they have because of their public employment, so we’ve always warned teachers that when it comes to going on strike, there’s a risk beyond losing their jobs.”

The demonstrations started started last month in West Virginia when educators from across the state participated in a nine-day strike that ended after Gov. Jim Justice, a Republican, signed a bill approving a 5 percent pay raise for state employees.

Similar demonstrations soon followed in Kentucky and Arizona. And even after Oklahoma lawmakers approved a bill giving teachers a $6,100 annual pay raise, educators there said they’re willing to fight “until hell freezes over” for higher pay and increased funding for education.

Texas teachers are feeling the squeeze due to a lack of state funding for public education. During the 2008 fiscal year, the state covered roughly 48.5 percent of the cost of public education, according to the Legislative Budget Board. By the 2019 fiscal year, it will support closer to 38 percent. And educators have long expressed their grievances over inadequate funding for public schools, which many argue cuts into their salaries. In 2016, they earned roughly $6,500 below the national average for teacher pay.

Experts say one reason the statute is in place is to help differentiate public employees, who are funded by taxpayer dollars, from those who work in the private sector. It also aims to ensure that the government runs in all economic weather. Some advocates for the statute say it helps make sure teachers are in the classroom during the school day.

"The goal is to ensure we don't have the sort of stoppages that would constitute a detriment to the school day and the school year. So the focus is on the students," said state Sen. Kel Seliger, R-Amarillo. "Teachers need to be in the classroom. The public expressions of opinion are very important. ... If teachers want to demonstrate, they should absolutely demonstrate but it shouldn't interfere with the school day."

The law doesn't extend to individuals demonstrating — only those who are "acting in concert with others in an organized work stoppage."

“When teachers come to the Capitol they’re doing it, by and large, on their own time,” said Ed Sills, a spokesman for the Texas AFL-CIO. “If you look at any legislative session there’s two weeks where teachers have a large presence at the Capitol: The two spring break weeks.”

But even if Texas teachers were to strike now, lawmakers aren’t around to respond to their demands.

“We have not received any indications that our members or teachers in Texas are getting ready to strike,” said Clay Robison, a spokesman for the Texas State Teachers Association. “Even if they were, the Legislature is not in session. So basically, what good would it do?”

Experts agree when it comes the Texas law, the definition of a work stoppage isn't clear.

“There hasn’t been enough cases in Texas for someone to say what is or what isn’t an 'organized work stoppage,'” Brady said.

"Not being able to go on strike makes me feel like educators do not have a voice in the way the Legislature has handled our pay and retirement system," said Christine Mauer, an instructional assistant for Leander Independent School District. "It says a lot about how the lawmakers and supposed 'representatives of the people' feel about public education when they continually and systemically do not properly fund our education system. The future of our state is in the hands of the educators in this state."

"I understand the sentiment behind not allowing public employees to strike. At the same time, it's frustrating because we have no bargaining power whatsoever," added Jeff Stanglin, a government instructor at Kilgore College. "In a state such as Texas — which hasn’t traditionally prioritized public education — we are left to the whims of leaders in Austin who repeatedly cut funds for education."

There are other avenues teachers can utilize if they want to protest, including contacting their legislators and writing their local newspaper, Brady said.

They can also testify at the Capitol. Several teachers took that opportunity during last year’s legislative session to oppose a union dues bill that would’ve ended the state’s practice of collecting dues for certain public employee unions through automatic payroll deductions. The bill failed during both the regular and special legislative sessions.

Texas isn't the only state with anti-strike laws on the books. Florida and North Carolina also prohibit strikes by public employees. Oklahoma law prohibits teachers unions from going on strike or threatening to strike “as a means of resolving differences with the board of education.” And in Kentucky, where strikes by school employees are illegal, teachers are using their sick days to call out of work and protest.

In lieu of striking, Texas teacher associations are asking their members to make their voices heard at the polls. A well-publicized push for teachers to vote during the March 6 primaries ended up with disappointing numbers for education advocates, but they say they're working to build political clout over the next several election cycles.

“What we’re focused on are the elections. We’re urging our members, and all other educators, to get out and vote and to vote for education candidates,” said Robison, the Texas State Teachers Association spokesman. “Vote for candidates who will vote to increase funding, decrease testing and vote against vouchers.”

“What the Legislature will listen to this year is votes,” he added.

Note: This story was inspired by a discussion on education policy happening now in our Facebook group, This is Your Texas. Sign up here to join the conversation.

Disclosure: The Association of Texas Professional Educators, the Texas State Teachers Association and the University of Texas at Austin have been financial supporters of The Texas Tribune, a nonprofit, nonpartisan news organization that is funded in part by donations from members, foundations and corporate sponsors. Financial supporters play no role in the Tribune's journalism. Find a complete list of them here.