Tech Bloc Activated: How To Turn SA Into A 21st Century City

A grassroots organization called Tech Bloc has taken SA by storm, starting a youth-centric conversation about what the city is all about and what it could be down the line.

Tech Bloc seemingly popped up out of nowhere in late spring, grabbing headlines and throwing two large rallies that attracted more than 1,000 people each. Even though it's still in its infancy stages, Tech Bloc has already affected policy change through its push to bring back Uber and Lyft.

So where did Tech Bloc come from and where is it going?

"He looked at the tech industry as a potential industry group that could be base support for his agenda, which was urban and tech friendly," Heard told the San Antonio Current last week. "Long story short, I began organizing a concept, like, why don't we throw a tech rally around the mayoral race and see if we get a lot of the urban, tech-centric young adults to get more involved."

Little did Heard know then that was essentially launching a fledgling movement.

In May, Tech Bloc held its first rally, attracting hundreds of people including Lew Moorman, the former president of Rackspace who rallied techies around bringing back Uber and Lyft — the rideshare companies that pulled out of San Antonio, complaining that regulations passed by City Council were burdensome.

"Uber and Lyft leaving was the galvanizing moment," Moorman told the Current.

Then Tech Bloc held another rally last month. More than 1,000 people showed up, including Mayor Ivy Taylor and other politicos from the city and county.

By the end of that month, Lyft had worked out a deal with the city to return under a nine-month pilot program. Uber is supposedly still in talks with the city while it continues to operate in smaller enclaves like Alamo Heights and Windcrest.

But back to that meeting between Heard and Villarreal.

"Around the same time, unbeknownst to me, Lew and Lorenzo Gomez, who runs Geekdom, they had been having some coffee discussions around the idea of writing some press editorials ... around the need for an agenda of technology innovation and growth in San Antonio," Heard said.

"Here's the thing, it became almost immediately apparent that we were not organizing an event. We were in fact organizing a movement that had legs way beyond an individual rally," Heard said. "We were kind of tapping into a reservoir of latent energy around the need to have an ongoing agenda and movement around urban livability, a strong central core and technology and innovation ... that we could all embrace city-wide."

While Tech Bloc's momentum arguably influenced city officials to work it out with Lyft, there's still more to be done.

"We love Lyft, but we want the full fleet of ride-share back on the streets ... hopefully over the next month or two," Moorman said with a firm, confident tone.

However, there's more to the organization than transportation network companies.

Moorman said Tech Bloc is involved with economic development organizations and is creating what he calls a "sales deck" around why tech companies should set up shop in San Antonio.

Then there are discussions about revitalization.

Tech Bloc is also tackling the issue of annexation.

"There are a lot of big complicated issues we're trying to get a handle on," Moorman explained. "Another piece that we're really interested in is we really think that Central Texas should be a super region ... one of the great super regions in the country."

Tech Bloc is also excited about Lone Star Rail — the long-sought commuter train that would run from SA's South Side to Georgetown, north of Austin.

"That's a way to brand the region to get companies from California," Moorman said, explaining that the proposed railway would bolster the concept of a Central Texas "super region."

And since Tech Bloc is saturated with millennials, Moorman said the organization will work to increase the youth vote.

"We want members registered and voting," he said. "If we don't vote, we won't get thing ... and the young professional demographic has a bad history on voting."

Lastly, Tech Bloc will explore ways to work with UTSA, Trinity, Alamo Colleges and other institutions of higher learning to bolster workforce development in an effort to make San Antonio an irresistible place to build a company.

"These are things we're putting time and energy in and we're going to get active," Moorman said. "Anyone who thinks we're politically going to go away — it's not going to happen." 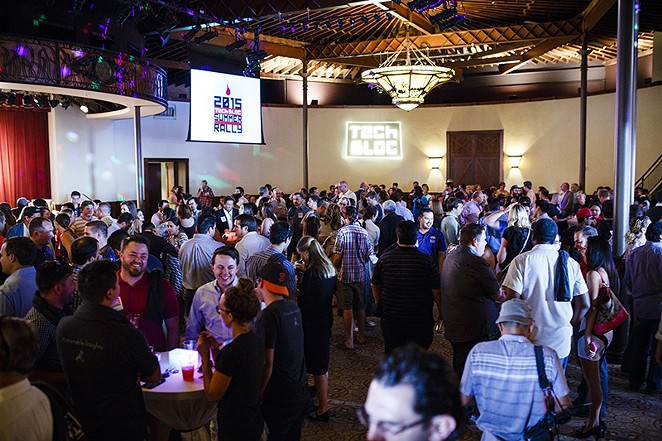 While Tech Bloc has struck a chord with San Antonians and grown into a movement that has rebooted the conversation over what it means to be a 21st century city, not all tech-minded people are convinced it's on the right track.

Christian Rios, who owns an arcade called Dreamanoids on the West Side, said he thinks Tech Bloc's priorities are misplaced.

"There's this huge emphasis on bringing outside resources in to make it look like we're other places and we don't want to get involved in our own community," Rios said. "And what's really disheartening, coming from the South Side of San Antonio, is that there is more than enough interest, more than enough capability out there that literally just gets pushed aside because they won't be given opportunities."

Throughout his life and in college at the University of Incarnate Word, Rios, who previously worked at Apple corporate headquarters, said he felt marginalized in the tech world.

"I felt like a huge social outcast because I was brown, trying to be, you know, in this tech realm where almost nobody saw me," Rios said.

That's why Rios runs an arcade.

"I realized that here in San Antonio, there isn't a place for me. There just isn't," Rios said. "I won't name any places by name. I've gone to a lot of these tech places and the non-verbal attitude toward me is immediately felt."

If Rios ran an organization like Tech Bloc, he said he'd search within the Alamo City to tap and promote local talent.

"We really need to reach out to these school districts, and I'm not talking about Alamo Heights or NEISD where these kids, they all have computers at home. They have all the resources in the world," Rios said. "We need to go to these places where these kids don't have any of that."

Go to any library on the West Side, South Side or downtown and you'll see the need, Rios said.

"It's like an adventure for them," Rios said, explaining that those libraries are often used by people seeking internet access for entertainment, education, employment and other real-life needs.

"If you could get a youth a computer and internet in some capacity, he might go to college and graduate. It's that simple," Rios said. "I really believe that because as much as San Antonio wants to be this big tech beacon, I mean, just look around, man. Our people, our heart and our soul, some of them, they don't even know how to use the internet."

In Rios' view, San Antonio will never be that beacon without improving access to technology in marginalized communities. And if Tech Bloc overlooks that factor, in Rios' eyes, it will just perpetuate the cycle of looking outward for success rather than within.

Food for thought. Perhaps another item for Tech Bloc to add to its growing to-do list.