Ted Cruz and Alexandria Ocasio-Cortez Agree to Work on Bill Together, Twitter Users Freak Out 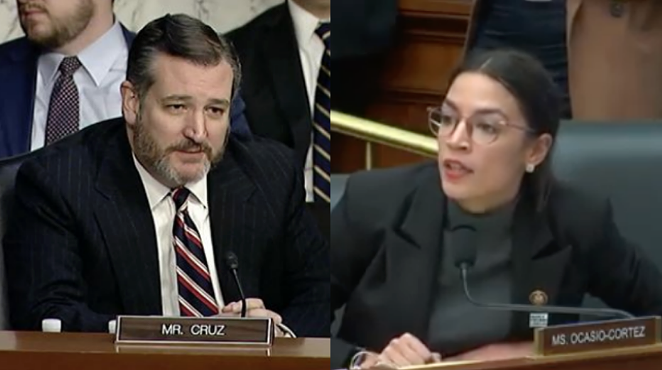 Hell hasn't frozen over, but it's true. Sen. Ted Cruz and U.S. Rep. Alexandria Ocasio-Cortez, two of the most far-leaning elected officials in their respective parties, are teaming up.

On Thursday, Ocasio-Cortez tweeted that she believes members of Congress shouldn't be able to "leverage [their] service" to become lobbyists. At the very least, there should be a wait period before members head off to become corporate lobbyists.

If you are a member of Congress + leave, you shouldn’t be allowed to turn right around&leverage your service for a lobbyist check.

I don’t think it should be legal at ALL to become a corporate lobbyist if you’ve served in Congress.

At minimum there should be a long wait period. https://t.co/xMu9Mwmdm6

Then, Cruz shocked Twitter users when he said he agreed with AOC.

Here’s something I don’t say often: on this point, I AGREE with @AOC Indeed, I have long called for a LIFETIME BAN on former Members of Congress becoming lobbyists. The Swamp would hate it, but perhaps a chance for some bipartisan cooperation? https://t.co/jPW0xkH2Yy

"I have long called for a LIFETIME BAN on former Members of Congress becoming lobbyists," Cruz tweeted. "The Swamp would hate it, but perhaps a chance for some bipartisan cooperation?"

Ocasio-Cortez jumped at the opportunity to get business done, laying out conditions in which she'd co-lead a bill with Cruz.

.@tedcruz if you’re serious about a clean bill, then I’m down.

If we can agree on a bill with no partisan snuck-in clauses, no poison pills, etc - just a straight, clean ban on members of Congress becoming paid lobbyists - then I’ll co-lead the bill with you. https://t.co/AZTbmdSexv

"@tedcruz if you're serious about a clean bill, then I'm down," the freshman congresswoman tweeted back. "Let's make a deal."

Now that sounds like a solid bipartisan effort. At least at the outset.

Still, Twitter users were taken aback by the unlikely partnership.

The most ambitious crossover of our generation

The world is ending because now I agree with @tedcruz agreeing with @AOC. Note to Democratic leadership - if you try something, some Republicans just might agree when you didn't expect it. Think about it. https://t.co/1rMQjF0Rlh

This is the kind of threads that make me happy. Two people of wildly different political views come together to SOLVE problems. Lets see if they can actually work something out https://t.co/hhnZdqCX6f