Ted Cruz falls asleep during presidential address, and Julián Castro can't resist jabbing him for it 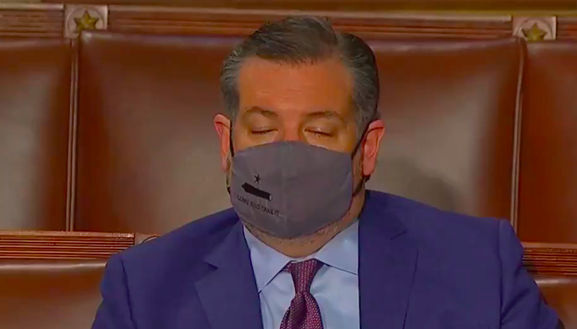 So, maybe President Joe Biden's congressional address Wednesday wasn't the most riveting speech in U.S. history. Started strong, but like a lot of them, it dragged a bit during the middle.

Even so, someone needed to pour some Starbucks down U.S. Sen. Ted Cruz's gullet. By the looks of Twitter video shared by Vox journalist Aaron Rupar, Texas' junior senator just couldn't keep his eyes open during the address.

Ted Cruz appears to be dozing off pic.twitter.com/nFva4LBCkj

Dreaming of Cancun? Or maybe his next chance to play armchair insurrection leader? Who knows.

Whatever the case, former San Antonio mayor and 2020 Democratic presidential candidate Julián Castro wasted no time getting in a jab at the snoozing senator. Because, well, the material kinda writes itself.

Ted Cruz is taking a siesta at tonight’s Biden speech, asleep on the job as usual. https://t.co/eP3SHi8e0q