Ted Cruz is running for president in third season of dark, satirical superhero show The Boys 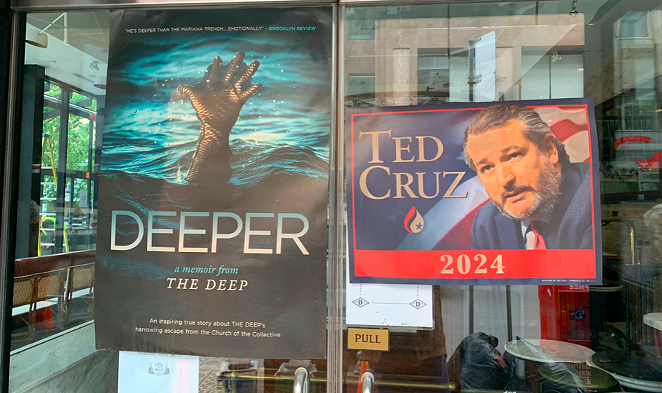 Nothing says "dystopian" quite like the prospect of U.S. Sen. Ted Cruz, R-Texas, in the White House.

Which may explain why a Ted Cruz 2024 poster is among the fake ads posted around the Toronto set where darkly satirical superhero series The Boys is shooting its third season.

The poster was first tweeted out by Toronto Filming, an outlet that tracks movie and TV news in the Canadian city, and subsequently picked up by the pop culture blog Winter Is Coming. Other posters shared in the tweet  appear to take a swipe at superhero merchandising and Marvel's ubiquitous advertising for its movie franchises.

Was going to save mine, but everyone was posting yesterday. Ted Cruz 2024 🤦‍♂️🤦‍♀️ pic.twitter.com/KEMHBA1daj

While Winter Is Coming didn't include confirmation that a presidential run by the satire-ripe Cruz would be a story arc in the third season, the prospect does play into the themes of dystopia and authoritarianism sprinkled heavily through the show.

After all, Cruz's frequent and bogus claims that 2020 election was stolen fanned the flames of the deadly January 6 insurrection. Not to mention, the guy's built his brand on trying to be the biggest prick in Washington — and by most accounts succeeding.

As Winter Is Coming points out: "The second season featured a prominent arc for a character named Stormfront, a hero who ended up being a literal Nazi who wanted to revive the values of the Third Reich. Meanwhile, in our world, American scholars are banding together to warn that the country’s democracy is at risk in the face of a wave of Republican-backed voter suppression legislation. Putting a right-wing extremist like Cruz on the path to the presidency sounds right up this show’s alley."

The blog also noted that the Cruz poster also could have something to do with comedian Seth Rogen being a producer for the series. Rogen is among the celebrities with whom Cruz has engaged in a prolonged Twitter feud. (Although, at some point, it seems like every man, woman and child in Hollywood will have earned that distinction.)

"I wonder if we’ll see more digs once the season lands on Amazon," Winter Is Coming added.

While we'll have to wait on an answer to that rhetorical question, fans of The Boys who saw the original tweet didn't seem thrilled about seeing Cruz in the White House. Indeed, one said she'd cast a ballot for the homicidal nazi Homelander before she'd back the Texas Republican.

I would vote for Homelander before I’d vote for Cruz. Just saying.