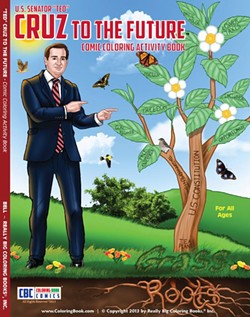 Ted Cruz just announced that he is running for president and the laughs are already starting.

An attorney from Arizona, also named Ted Cruz, is having a laugh at the presidential candidate's expense after registering the web domain www.tedcruz.com, Mother Jones reported last May.

Apparently, Arizona Ted Cruz registered the domain back in 2008.

There's not much going on at www.tedcruz.com other than capital letters urging website visitors to support President Barack Obama and to reform immigration laws.

This, however, is not the only domain the presidential candidate or his crack digital gurus didn't register.

There's not much going on at that website, just a bunch of cryptic photos of roads and clouds.

That same Mother Jones story says an Omaha, Nebraska web design firm owned the domain and wouldn't disclose who their client was.

In the mean time, Senator Ted Cruz will be plotting a strategy to move into the White House, and we wonder if his talking points will come right out of "Cruz To The Future," a coloring book about the man and his ideals that was published last year by Really Big Coloring Books, Inc.