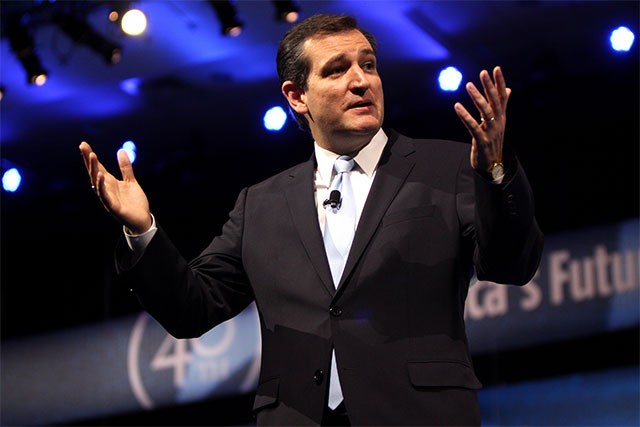 The federal government has come to a screeching halt because of it. U.S. Sen. Ted Cruz (R-TX) spent 21 hours faux-filibustering against it. Right-wing personalities have even likened it to slavery. The GOP’s fight to destroy ‘Obamacare’ has reached new, headline-grabbing heights.

While eyes are on the action at the federal level, some conservative Republican governors have used every tool in their arsenal to thwart the Affordable Care Act (ACA) on a state level—from rejecting the Medicaid expansion to signing ‘Health Care Compacts’ into law.

And it looks like they’ve gotten a little help from their corporate friends.

Behind some of the statewide anti-health care strategy you’ll find The American Legislative Exchange Council (ALEC), a shadowy network of corporate lobbyists, representing companies including Koch Industries, ExxonMobil, AT&T and Pfizer, that draft model legislation increasingly used by state lawmakers, particularly those of the conservative Republican persuasion. In return, legislators get invited to swanky parties (read: fundraising opportunities), all-expenses paid trips and even free childcare. More than 1,000 of these corporate-backed bills are introduced into statehouses by legislators each year, with one in every five of them enacted into law, according to the Center for Media and Democracy.

The doors to ALEC busted wide open when in 2011 a whistleblower released a stunning trove of documents exposing the inner working of the secretive organization to CMD, which made it available for public viewing. While recommending model legislation may be part and parcel of the think tank process, what sets ALEC apart is the pure corporate influence—98 percent of its revenue comes from corporations—that has a direct role in changing, enabling and killing legislation alongside lawmakers. Oftentimes, legislators come back to the statehouse without publicizing ALEC’s involvement in the bills they sponsor.

“It revealed the breath and depth of corporate influence over law and policy,” Brendan Fischer, CMD’s general counsel told the Current, referring to the 2011 evidence. “ALEC exists for the benefit of the corporations that are footing the bill and the evidence indicates they’re getting a lot in return.”

If the acronym sounds familiar, but you can’t quit pin where you last heard it, chances are it was during the George Zimmerman trial. The ‘corporate bill mill’ made national headlines and garnered scrutiny when a piece of their model legislation was tied to the infamous ‘Stand Your Ground Law’ that played into the acquittal of Zimmerman in the killing of unarmed teenager Trayvon Martin. The rise of ALEC’s profile in such pejorative terms likely led to the exodus of several legislative members in 2012.

In sum, ALEC drafts ideologically and financially motivated legislation that, among other goals, seek to weaken labor laws and environmental regulation, and privatize education—and health care laws are a particular focal point. In 2011, the group created the handy “State Legislators Guide to Repealing Obamacare,” a step-by-step guide detailing how to locally dismantle the ACA. Part of the strategy includes warning against the federal Medicaid expansion and instituting a law to provide a state-level “defense against Obamacare’s excessive federal power.” Among other things, the “Freedom of Choice in Health Care Act” helps arm states in litigation against the ACA.

Sound familiar? Texas’ statewide leadership appears to have taken a page straight from ALEC’s playbook in terms of responding to ACA policy. A staunch and vocal opponent of Obamacare, Gov. Rick Perry refuses to expand Medicaid, effectively denying more than 2 million eligible working adults access to health care. He’s thrown up extra barriers for ACA navigators, the assistants trained to aid residents in signing up for ACA coverage. The governor has even gone so far as to deem Obamacare a “criminal act.” Under Perry’s 2011 legislature, the “Health Freedom Act”—written by a legislator who also serves as an ALEC task force member—directly mimics ALEC’s key vehicle for sinking Obamacare.

It may be no surprise then that ALEC and Texas legislators have cultivated a cozy relationship. From 2001-2011, Texas politicians saw $16.2 million from ALEC corporate partners, the second highest among states. Perry leads as the largest single beneficiary of ALEC funds, receiving more than $2 million in campaign contributions from ALEC corporate partners, according to Progress Texas, which tracks ALEC’s influence in state politics. As the recipient of a 2010 award from the organization, it’s safe to say Perry stands as an ALEC star.

“Texas is probably one of the strongest places in the country for ALEC laws,” said Phillip Martin, deputy director of Progress Texas. “ALEC has tremendous influence in our state. Texas policy is shaped by ALEC and like-minded corporations that value the profit of their companies over the well-being of Texans.”

ALEC’s largesse seems to have bought it a veritable testing ground for their policy aims here. According to Martin, ALEC’s national model for health care legislation originated in Texas, perhaps not surprisingly via Sen. Cruz himself.

The ‘Health Care Compact’—an agreement between participating states that shields them from the ACA by transferring power back to state governments to disburse their own health care funds through block grants in lieu of a federal plan—was first launched by former Texas solicitor general Cruz while he was a fellow at the Texas Public Policy Foundation, a research organization with strong ties to ALEC that bills itself as “one of the nation’s premier free market think tanks.”

With TPPF, Cruz co-authored a 2010 report that describes Obamacare as an “unconstitutional federal overreach and violation of 10th Amendment rights.” The paper then spelled out what would become ALEC’s own model legislation to upend Obamacare. The national Health Care Compact Alliance also credits the idea to TPPF and helpfully explains in a headline, “ALEC adopts Health Care Compact as model legislation.”

The compact is popular among conservative governors seeking to distance themselves from the feds, including Gov. Perry, who signed Texas’ interstate health care compact, authored by an ALEC Health and Human Services Task Force member, just weeks before announcing his presidential candidacy. (It’s worth noting that while seven states to date have signed the compact into law, it’s got no teeth until it receives unlikely Congressional approval, making it a largely symbolic measure as of now.)

While Perry’s attempt to influence national politics drifted away with his failed presidential bid, the symbiotic relationship between TPPF and ALEC may yet be able to succeed in spreading Texas conservative ideals, including those of extremists like Cruz, throughout the nation, while bringing additional “greatest hits” home from other ALEC hotbeds. “TPPF is really ALEC’s home away from home,” said Martin. “A lot of research from TPPF relies on ALEC and ALEC member organizations.”

In an attempt to further lift the veil shrouding ALEC, the Center for Media and Democracy issued open records requests to multiple legislators across the country associated with ALEC, with little trouble—until they got to Texas.

A recent fight to obtain ALEC-related documents played out between CMD and a state lawmaker unwilling to hand the information over. After ALEC began stamping its material with a “disclaimer” that argued it was exempt from state open records law, freshman State Rep. Stephanie Klick (R-Fort Worth) then tried to withhold ALEC documents, seeking an Attorney General opinion in the meantime. That’s especially troubling for CMD’s Fischer since ALEC doesn’t release its list of members or funders and routinely bars the press from attending task force meetings—one of the only effective avenues in unearthing the group’s impact is through records requests.

“They intentionally try to operate in secret, but we’ve been able to uncover a fair amount of information about their influence through open records law,” said Fischer. “But lately, in our opinion, they’ve been trying to sneak back into the shadows.”

Turns out ALEC’s latest scheme to remain as secretive as possible didn’t fly with the Texas AG office. CMD and the Freedom of Information Foundation of Texas, who also filed a brief against ALEC’s failure to disclose, prevailed. Early last week, CMD got their hands on the documents, which reveal a continued legislative push to erode Obamacare.

Klick and other legislators were invited to an August 2013 ALEC annual meeting in Chicago, where the group’s Health and Human Services Task Force would brief them on model legislation that seeks to undo the ACA, including a law that would authorize Medicaid block grants to states, a resolution that opposes government-mandated rate caps on health insurance premiums because it, “flies in the face of the free market” and expectedly, the “Health Care Freedom Act,” according to the released materials, made available to the Current.

ALEC task force members attending the Chicago meeting enjoyed free travel, lodging and some meals, as well as the potential to be reimbursed for vaguely stated “other” fees, according to the documents.

“It seems pretty significant that all of these Texas lobbyists are flying up to Chicago, booking an expensive hotel room, and sponsoring these expensive dinners in Chicago for Texas legislators,” said Fischer. “It’s a good example of how ALEC works and who it works for. It’s not just the existence of model bills, but everything that surrounds it—all of those the opportunities for excessive influence and developing relationships to gain access to legislators.”

Fischer says he was surprised by the open records law battle in Texas as it marked the first known occasion where ALEC formally requested that a state Attorney General grant immunity from sunshine-in-government laws.

However, considering our deep ties to ALEC, perhaps it makes sense that Texas has more to hide.