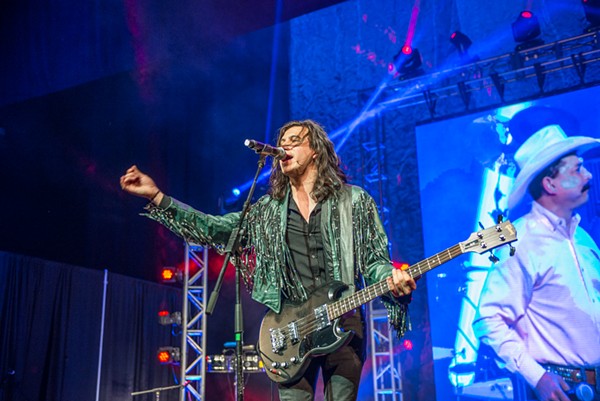 Elida Reyna was the big winner at the 36th Annual Tejano Music Awards which took place last night at the Tobin Center, but the emotional night clearly belonged to the Navaira family: the late Emilio was paid a tribute by sons Diego, Emilio IV and the rest of The Last Bandoleros (Derek James and Jerry Fuentes), niece Destiny won Best New Artist (female) and nephew Rigo won as Best New Artist (male). Emilio himself was present via old videos on a big screen.

In total, Reyna, the singer for Avante, won four awards: Female Vocalist, Entertainer, Song ("Adicta") and Tejano Album of the Year (Adicta). Michael Salgado followed with two (Male Vocalist and Norteño Album for Por cielo y tierra). For the first time, an award for Best Gospel Album was given out, and the honor went to Ricardo Sanchez's Grand Symphony, but it was fellow nominee Javier Galvan (former singer of Grupo Fama) who turned the Tobin into a huge prayer hall, standing room only. (For complete list of winners and nominees, click here)

At one point, actor Tony Plana (who emceed with singer Erica Gonzaba) asked the crowd, "How about this election?" and followed with "The inmates have taken over the asylum!" Besides isolated nervous laughter, the crowd answered with a creepy silence. Soon after, the sons of Emilio Navaira (with The Last Bandoleros) paid tribute to their dad with a roaring version of "Even If I Tried" (from Emilio's country Life is Good album). Towards the end of the song, they were joined by uncle Raulito, a member of Emilio's band Rio.
Minutes later, with Emilio IV switching from drums to acoustic guitar, Diego sang "Mundo perfecto," from Emilio's Quédate album.
Besides the Bandoleros segment, Stefani Montiel had the best live segment, with a stirring rendition of her recent hit "Cumbia Fantasía," and the legendary Yolanda Del Río paid a solid ranchera homage to the late Juan Gabriel.

Since 2004, it was the best TMA I've attended: perfect venue, smoothly organized, good sound, no long waits. More than half of the venue was packed, and Tejano seems to be alive and well. But we need more. Most of the nominees seem to be the same year after year, and the younger bands are still unable to shake the foundations of the genre and offer something new, instead paying more attention to wardrobe than musical evolution. The few who succeed at this (Stefani Montiel, whose last two albums were the best in the genre) and conjunto powerhouse Los Texmaniacs (whose excellent Americano Groove lost to Jaime y Los Chamacos' fine but generic Born to Be Bad) are routinely ignored. And please, guys: If you're not on tour, show up to receive the award. Too many no-shows, even in the case of some who were onstage minutes earlier. If you don't care, why should we?