As small business owners at historic La Villita and Market Square prepare to reopen in early June, some are looking to the city for financial relief.

They’ve been told that rent for April and May, when the two historic districts have closed due to the Covid-19 pandemic, has been suspended. Many, however, are confused and don’t know whether they will be required to pay rent for those months.

“We all, as tenants, kind of thought that since the city chose to close their properties until June … the rent wouldn’t pick up again until (June) 1 as well,” said Barry Clark, who co-owns La Villita Café and the Scentchips shop. “But we haven’t heard ‘yes’ or ‘no.’ I think (the city’s) biggest concern has been figuring out how to open safely. They want to make sure they’re demonstrating best practices.”

John Jacks, director of the Center City Development and Operations Department (CCDO), declined to be interviewed for this report.

When asked via email if the rent payments are deferred (to be paid back later) or cancelled entirely, Jacks said, “Recognizing the immense challenges resulting from the Covid-19 pandemic, (CCDO) worked with Market Square and La Villita tenants to temporarily suspend rent payments for April and May. Additional rent relief options are also under consideration as part of a larger plan to assist small businesses affected by Covid-19.”

As a form of crisis relief, his department has proposed that the annual base rent increase of 2% and common area maintenance fee increase of 2.5%, at La Villita, at least, be put on hold for the next 12 months. 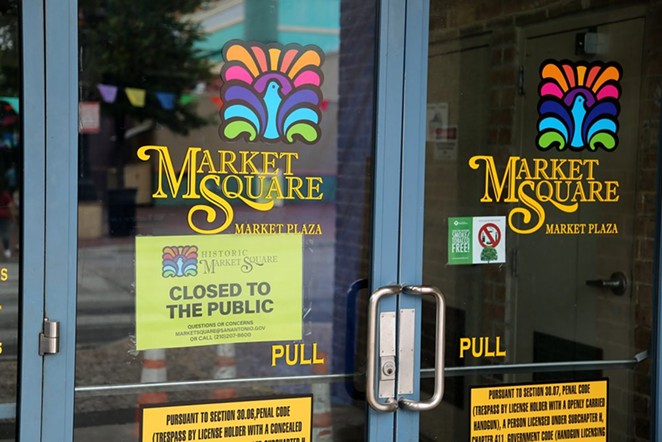 The downtown shopping districts are city-owned properties that were temporarily closed March 24. Combined, they lease to more than 100 tenants. Some restaurants are open for take-out and limited dine-in service, such as Guadalajara Grill at La Villita and Mi Tierra at Market Square. Some shops, such as Texas Hats at Market Square, are open because they operate in privately-owned buildings. But the vast majority of vendors at both locations have had their doors closed to customers for weeks.

“Once La Villita and Market Square reopen to the public, individual tenants may choose to operate their shops as they feel safe to do so,” Kelly Saunders, a spokeswoman for the Center City Development and Operations Department (CCDO), said in an email.

Tenants such as Deborah Sibley, owner Capistrano Soap Company at La Villita, say they won’t be fully staffed until they see foot traffic return to the area. They are preparing for a vastly different commercial landscape than the one they’re used to. So are small business owners are Market Square.

“We rely a lot on tourism and conventions, and that business is not where it used to be,” said Yvette Ramirez, president of the San Antonio Farmers Market Plaza Association. “We were counting on Fiesta week and the Tejano Music Awards Fan Fair to really push up business, but unfortunately we were not able to have those two festivals.”

According to a recent report by the San Antonio Express-News, 23 citywide conventions and 28 smaller programs have been cancelled. The city had estimated $60.9 million in revenue from hotel occupancy from March to September, but now expects $20.3 million during the same timeframe, according to the Express-News.

It is unclear how much revenue the city has lost from La Villita and Market Square, and how many retail locations the city owns, because city officials declined to provide those figures.

Returning to their stores also poses a risk for certain tenants, especially those who are more at risk of infection.

“There’s a lot of fear, because a lot of the tenants are older and considered more high-risk,” Clark said. “So now they have to consider what’s going on with the virus, and whether they want to put themselves in that precarious situation.”

Beyond the financial challenges, tenants are also preparing for new in-store policies to keep customers safe during the pandemic. These measures include facemask requirements, social distancing policies, and consistent decontamination of surfaces and products.

“We’ll be doing everything we can to do everything mandated of us,” Ramirez said. “We’re training business owners to be wiping things down to disinfect them, especially when customers are picking up items to look at them.”

The impact of the closures has forced business owners into a new normal. With such sudden shifts, many tenants are looking for ways to adapt and update their businesses to new formats, potentially changing the landscape of downtown commerce in San Antonio.

“I think the tourism business is forever changed,” Ramirez said. “This has opened everybody’s eyes to the fact that everything can change at a moment’s notice. The majority of tenants at Market Square have been there for over 20 years, and so we’ve done it the ‘mom-and-pop’ store way and realized that may need to change.”

Benjamin Gonzalez is a reporting intern at the San Antonio Heron, a nonprofit news organization dedicated to informing its readers about the changes to downtown and the surrounding communities.