July 15, 2012
comment
If the name Terra-Genesis at first suggests a sci-fi novel, you might not be far off. It is about both science and Ben Amor's unique life story. Terra-Genesis is a multi-faceted nonprofit which includes the Community Resources Directory, a large database of resources available in print and on the internet. The directory contains over 4,000 agencies in a easily searchable format where people can find help and opportunities to match their specific needs. How the directory and Terra-Genesis reached their current incarnation is an evolutionary tale beginning with a Tunisian dreamer whose heart is full of amour for helping people. For our interview, Amor brought handouts--a chronological list of life events, ideas and accomplishments. Believe me, it helped to have a program.  Amor has six different projects currently under his purview. Amor's extraordinary personal story begins in 1948, when he was born Ali-Ali in Tunisia, Africa. As a young boy he herded sheep. As destiny steps in, Amor is able to attend elementary school. He continued his schooling and became a electrical technician which allowed him to work on a Tunisian Airbase. He subsequently came to the U.S. for more training where he visited San Antonio's Hemisfair in 1968. Amor liked the city so much he made his way back in 1975 where he was hired at Datapoint. In 1983, Amor became involved with the World Hunger movement. "One night I woke up to the sound of hurt children crying, a wail of hurt in different languages," Amor explains. "I could not get the sound out of my mind and began doing research on hunger.  I discovered that every second of every day, 21 children--mostly infants--are dying from infections and malnutrition." It was this dream that spurred Amor's idea--to 'end world hunger' by using technology to provide world-wide connections to resources and information--that subsequently lead to the founding of Terra-Genesis. 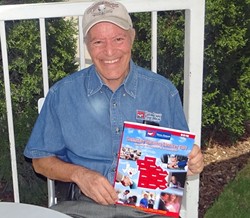 Ben Amor, Founder/Executive Director, Terra-Genesis One short year later, on July 4, 1984, the first board meeting was conducted for the newly minted 501 c (3) nonprofit Terra-Genesis, Inc. Dr. Randy Glickman, a medical researcher at UTHSCSA, has served on the board since the beginning. "We had a number of discussions before the concept solidified of the organization's structure and what its mission would be," Glickman explained in a phone interview. "I agreed to serve on a technical advisory board (later the Board of Directors) to help guide T-G in its initial phase. I think I was influential in getting the group to recognize that the idea of global data access, although tantalizing and obviously of great value, was probably out of our reach due to technological limitations at that time." Glickman suggested focusing first on local needs in the San Antonio area and providing resources such as health and educational information, which could be addressed very effectively. And so, the "Wellness Directory" was born. In 1986,  Amor created a computer based multiple keyword indexing system as the basis of the Wellness Directory.  The directory was available in hard copy and diskettes. Clunky by today's standards, but in the fast lane to the internet accessible version in use today. During the years the Wellness Directory was evolving into the Human Resources Guide and finally the Community Resources Directory, Amor is branching out with other projects such as: operating the First Family Well Being Center at the Ella Austin Community Center; extensively researching world-hunger; going to college; pitching his directory idea to the Tunisia government; and receiving accolades for his work. As technology catches up with Amor's dream, the directory goes on the world-wide web in 2004 with xnetconnect.org. "With the power of the internet, T-G is now is addressing the global need for up-to-date information," Dr. Glickman said.  "I think the programs, envisioned by Ben Amor and implemented by the hard-working people of Terra-Genesis, enable people of limited educational, economic, and social resources to have access to accurate and timely information, which otherwise they would have great difficulty obtaining." In addition, there are directories available for all the major areas of Texas.

In tandem with the directory going live, the iKiosk program was created. iKiosks are computer equipped booths which allow folks access to the resource database in places like Haven for Hope, Presa Family Center, and The Neighborhood Place. There are iKiosks in 25 locations including Corpus and Blanco. In 2005, xnetafrica.org began in Tunisia, where they now have 1,000 resources and receive 12,000 hits a month. Over the past several years, the prolific Amor and Terra-Genesis partnered with Wedge Management in a housing program to help people become self-sustaining. There's also Amor’s "Self-Discovery" program, in use at Sav-Baby an organization that empowers pregnant and new mothers to be self-sufficient and successful parents. I wonder what the future holds for Amor and Terra-Genesis.  No doubt he's dreaming it right now. Maybe you'd like to help. San Antonio activist and nonprofit veteran Laura Carter believes in enabling the community to work from the heart, not just the wallet. During her time at the San Antonio Area Foundation, Laura managed website design and content for all published materials. She introduced multimedia and social media into the communications plan, increasing the community's participation in the Foundation's programs. She is currently Communications Director at Providence Catholic School helping to empower young women to become learners, leaders, women of faith and justice.