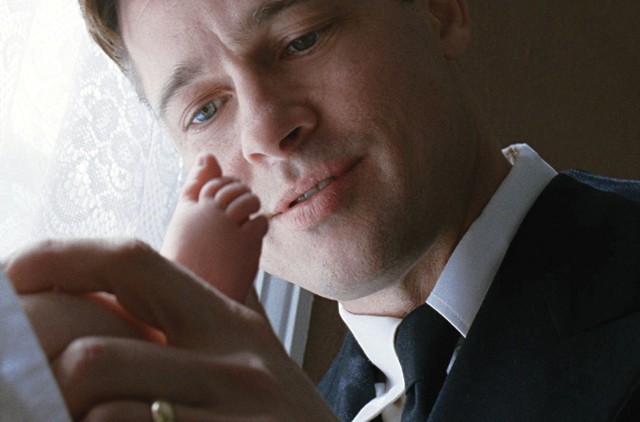 The Tree of Life

The Tree of Life, a film bracketed by nothing less than the inception and the end of a universe of suffering, moves its audience from the empathy of dinosaurs to the enmity of forced dining-room etiquette.

Following a quote from the Book of Job and a flame-like image meant to mark the emergence of the cosmos, a mother receives a telegram informing her of somebody’s death. The look of total shock comes over her face as she collapses into supernatural wailing. Cut to the husband, beneath the whorl of plane engines and propellers, receiving the same news.

Questions for God commence their ethereal traffic. Who are we to you? asks the mother, as cosmic plasma cakes over the galaxy. You let anything happen … Why should I be good if you are not? as prayers turn toward indictment.

In The Tree of Life, God (or the universe) is represented as a total Gnostic failure, the ultimate deadbeat dad, and God help those poor souls made in his image.

Mr. O’Brien (played with contained ferocity by Brad Pitt, one of the film’s producers) is representative of God’s contradiction and flaw on earth. As a failed musician and inventor with aspirations for worldwide patents, he isn’t so much a stern man as he is a resentful one. Living in a stolid post-WWII era, when the U.S. could boast a booming middle-class quality of life, Mr. O’Brien mourns not being loved for his musical talent. He plays his records and he plays his organ, engaging in his melancholic music for the spheres, while Mrs. O’Brien (portrayed with a kind of alluring heat and charity by Jessica Chastain) plays with the kids and wants only to love. It is not clear that she cares much for being loved, but she is adamant about investing her feeling into objects, people, events, and acts. And she wants her three boys to do the same.

Jack, one of the three brothers (performed with exhausted precision by Sean Penn) has grown, in his middle-age, frustrated and broken by guilt. He discusses failed relationships with his architect colleagues, stares at attractive women as they walk by his workspace, and doesn’t speak to his wife; Jack’s entire life has been a struggle between what he sees as nature and what he sees as grace. Through immediate flashbacks and flash-forwards, we see the joys and struggles of Jack’s fall from innocence to experience.

When Mr. O’Brien goes on a business trip to try to sell his inventions around the globe, the children rejoice in a kind of Edenic innocence that leads immediately to knowledge of good and evil. They get into trouble, they get hurt, and, in an especially poignant scene after the brothers mock a local drunk and a man with a muscle disorder, they see injured war veterans receiving assistance and arrested men forced into cop cars. Like the moment when Siddhartha realizes that life is pain and suffering, Jack notices that arbitrary nature and asks, “Can it happen to anyone?”

In a movie as knowingly expressionistic as The Tree of Life — a film that recalls Tarkovsky’s Ivan’s Childhood as well as David Lynch’s most vulnerable moments — it is perhaps unfair to rely upon the details of plot. Nevertheless, those details are compelling enough: A scarred family must go on despite the unthinking cruelty of fate and the fact that everyone is to blame. But how far can you take this blame? To the inception of the cosmos?

Between the poles of domestic entropy, with its moments of stolen lingerie, church-pew skipping, and firecracker-riding frogs, Malick orchestrates a panorama of utter despair and total affirmation.

This epic observance of Old Testament pangs and New Age panacea, shared by recovering addicts of all kinds, to literally “Let go and let God,” has been compared to Stanley Kubrick’s 2001: A Space Odyssey; the superficial similarities might be that both pictures are long, used the services of chief special effects supervisor Douglas Trumbull (who hadn’t worked in three decades), have a score that invites similarities to Thus Spoke Zarathustra, and have the audacity to point to where its protagonists are going and where they have been.

But if there is a starchild in The Tree of Life, he is not in some evolved last stage of pure thought, but in the very human child you can hold and touch right now. •