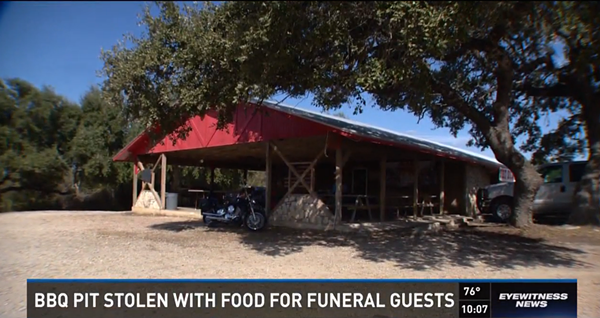 First the brisket bandit went on a meat-stealing spree. Then a young woman's body was stolen from a funeral home. Now it looks like we've reached the singularity of the two crimes.

According to KENS5, thieves took the pit from the Bumpkin Bar where owner Paul Minnick parked it Tuesday night as it cooked barbecue for a funeral.

Minnick said that he had left brisket smoking in the pit. Another 40 pounds of chicken still needed to be grilled in the morning. He said that the thieves stole from the funeral guests, and not just him. "They don't care, or else they wouldn't have done it. I have no respect for people like that."

The pit is easy to spot, with deer head silhouettes on the main chamber and, blue horseshoe handles, and crosses adorning the body. Minnick thinks that someone must have seen it as it was trailing smoke at the time. The Medina County Sheriff's Office is investigating.