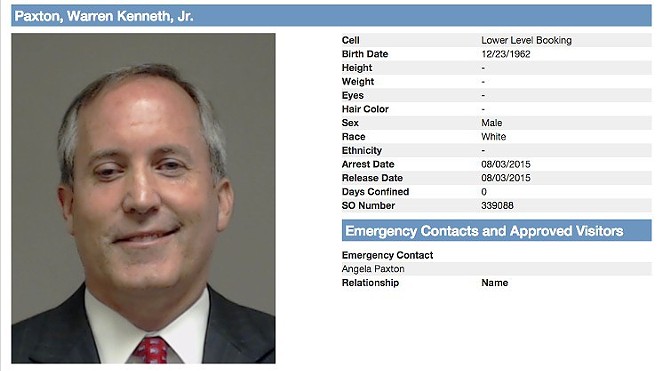 As the Texas Tribune reports, the judge overseeing the case against Paxton, the state's first sitting attorney general in more than 30 years to face criminal indictment, has set a trial date for May 1, in the final month of the state legislative session that began this week. Pretrial hearings could start as early as next month. If convicted, he could face between five and 99 years in prison.

The charges against Paxton, both in state state criminal court and in a U.S. Securities and Exchange Commission lawsuit against him, allege that he duped a state lawmaker and another investor into dumping money into a North Texas tech company Servergy Inc. without telling them he'd been compensated by the company to do so (a legal no-no). In the course of its investigation, the SEC had also accused Servergy of lying to its investors by falsely claiming its data servers had been sold to huge companies like Amazon and Freescale, when that wasn't true (the feds even accused the company of lying about the very servers it was hawking, falsely claiming they required 80 percent less cooling, energy and space than others on the market).

As we've reported before, Paxton's defense has been quite simple: that this is all about politics. Even though his criminal case wound up in his home turf, the GOP stronghold of Collin County; it was a Republican judge who appointed the special prosecutors assigned to investigate the case that led to Paxton's indictment (one of whom even helped overturn former House Majority Leader Tom DeLay’s conspiracy and money-laundering convictions); the, in Paxton's words, "vindictive" judge who over saw the grand jury that indicted him was also a Republican; and nearly every judge on each appeals court that refused to dismiss his charges is a Republican.

In legal filings submitted in the SEC last month, Paxton's legal team also set its sights on Corsicana Republican state Rep. Byron Cook, one of the investors Paxton's accused of misleading. In 2011, when Paxton (then a state representative) was the Tea Party-backed pick to replace middle-of-the-road Republican state Rep. Joe Straus as House Speaker, Cook was one of the so-called moderate conservatives who helped defeat Paxton's bid. Then, when Paxton ran for AG in 2014, Cook backed his more moderate opponent in the GOP primary. They allege Cook may be changing his story to help bolster the case against Paxton for political reasons. “Mr. Cook is a member of the Texas legislature and is reported to have supported Mr. Paxton’s opponent in the Republican primary for the Attorney General nomination," Paxton's lawyers wrote.

With Paxton's trial set for the always-heated end of the legislative session, things could get super awkward if his lawyers continue to lean on intra-party political squabbling as a defense theory. Which means, thanks to Paxton, we could get even more fireworks than usual when the state wraps the 85th Texas Legislature later this year.