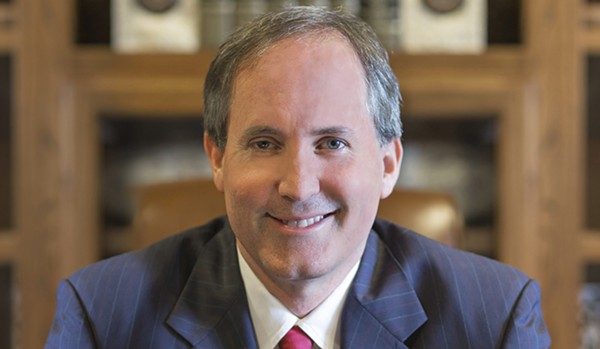 The Lone Star State's chief lawman says he remains "prayerful" that the Supreme Court will heed millennia of family tradition and Judeo-Christian instruction by discriminating against same-sex couples who want to get married.

Guess the ancient Greeks, Native Americans and every other society the world's ever seen didn't get the memo.

Anyway, Texas Attorney General Ken Paxton seems kind of desperate about keeping it illegal here for same-sex couples to marry. The Supreme Court might rule that same-sex marriage bans are unconstitutional on Friday or Monday.

"I would recommend that all County Clerks and Justices of the Peace wait for direction and clarity from this office about the meaning of the Court's opinion and the rights of Texans under the law," Paxton says in a press statement.

And don't misunderstand him.

So, this isn't a millennia of alleged family tradition and Judeo-Christian instruction that defines marriage? Texas does? And Paxton interprets the United States Constitution in a more scholarly and judicious way than the highest court in the entire damn country?

"The First Amendment clearly protects religious liberty and the right to believe in traditional marriage without facing discrimination," Paxton says. "If the Court suggests otherwise, prudence dictates we reflect on precisely what the Court says, what it means, and how to proceed consistent with the rule of law.”

Oh, by the way, Texas Governor Greg Abbott signed the Pastor Protection Act, which says preachers who don't want to marry same-sex couples don't have to. There are plenty of pastors who are just fine with marrying same-sex couples.

Bexar County Clerk Gerard "Gerry" Rickhoff probably doesn't give a damn about Paxton's recommendation as he's already de-gendered the marriage license. He says he's issuing licenses to same-sex couples who want to get married until the need is met if the Supreme Court rules that the state's marriage ban for same-sex couples is unconstitutional.