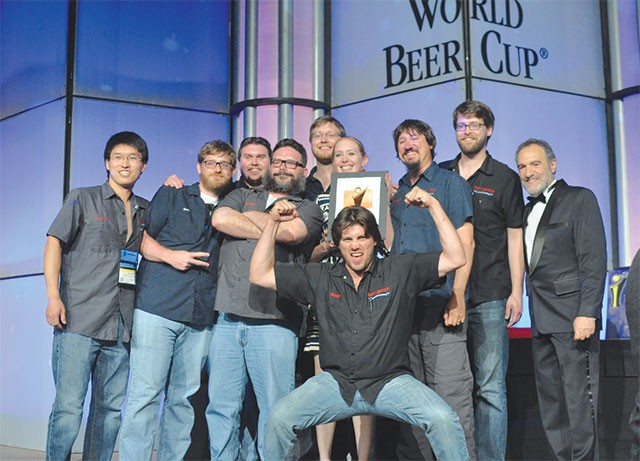 The 2014 Craft Brewers Conference is set to descend on Denver, Colo. next month and with it the biennial World Beer Cup competition (WBC). Breweries from all over the globe will enter various ales and lagers in this international competition sponsored by the Brewers Association, the non-profit trade group that represents many small, independent breweries in the United States. The competition itself has been running since 1996 and sees entries in every style category imaginable.

Texas came up big in 2012 with Houston’s Saint Arnold’s Brewing Co. taking home a silver for its Pumpkinator in the pumpkin beer category, along with a bronze for Santo in the American-style dark lager category and a silver for Endeavor in the Imperial IPA category. Austin newcomer Hops and Grain took home a gold medal in the German-style brown ale category for its Alt-Eration, and Austin’s Live Oak Brewing took home a silver in the South German-style weizenbock category. Shiner-based Spoetzel Brewery brought home silver for its flagship beer, Shiner Bock, in the American-style dark lager category.

Ranger Creek will look to get the world’s thoughts on their chocolate-y Mesquite Smoked Porter, their nutty, smooth Oatmeal Pale Ale, the Belgian-style Lucky Ol’ Sun golden ale and Small Batch No. 7, an imperial sweet potato stout that boasts notes of chocolate and spices. When asked what he thought about their chances, Ranger Creek Co-founder Mark McDavid responded, “I always like our chances.”

Other entries from Texas include Atrial Rubicite, a sour ale refermented with strawberries, and its sister sour Aurelian Lure, refermented with apricots, from Austin’s Jester King, and four from The Austin Beer Garden Brewing Co. including Hell Yes helles-style lager and Superliner, an IPA heavy on the Simcoe hops. Dallas-area Peticolas Brewing looks to enter three this year including Velvet Hammer, an imperial red ale.

The World Beer Cup boasts an international slate of judges (211 from 54 countries in 2012) and handed out a total of 284 awards in the last competition. It is quite an honor to receive an award in the WBC—those judging are brewers and other industry professionals who bring a wealth of knowledge. Rick Engel, founder of Uncle Billy’s Brewery in Austin, which also has a few entries, summed it all up for Texas: “It’s exciting to see so many new breweries and brewpubs opening across the state!”