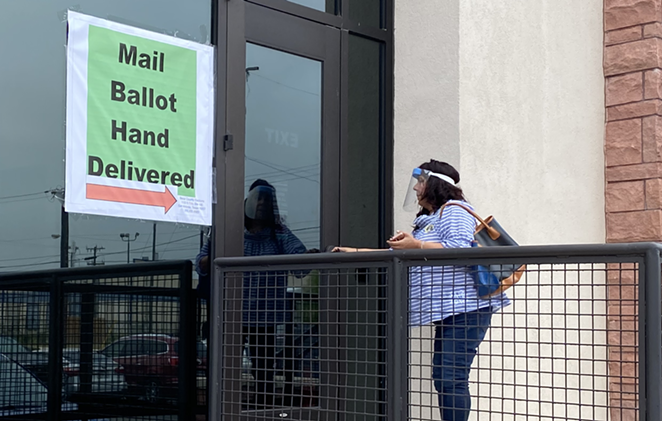 Texas election officials may continue rejecting mail-in ballots if they decide the signature on the ballot can't be verified, without notifying voters until after the election that their ballot wasn't counted, the U.S. Fifth Circuit Court of Appeals ruled on Monday.

The appeals court halted a lower court’s injunction, which had not gone into effect, that would have required the Texas secretary of state to either advise local election officials that mail-in ballots may not be rejected using the existing signature-comparison process, or require them to set up a notification system giving voters a chance to challenge a rejection while their vote still counts.

Requiring such a process would compromise the integrity of the mail-in ballots “as Texas officials are preparing for a dramatic increase of mail-in voting, driven by a global pandemic,” reads the Monday opinion issued by U.S. Fifth Circuit Judge Jerry E. Smith.

“Texas’s strong interest in safeguarding the integrity of its elections from voter fraud far outweighs any burden the state’s voting procedures place on the right to vote,” Smith wrote.


Before mail-in ballots are counted, a committee of local election officials reviews them to ensure that a voter’s endorsement on the flap of a ballot envelope matches the signature that voter used on their application to vote by mail. They can also compare it to signatures on file with the county clerk or voter registrar that were made within the last six years.

The state election code does not establish any standards for signature review, which is conducted by local election officials who seldom have training in signature verification.

Voters must be notified within 10 days after the election that their ballot was rejected, but state election law does not require affording them an opportunity to challenge the rejection, the appeals court ruling noted.

In August 2019, two voters, George Richardson of Brazos County and Rosalie Weisfeld of McAllen, filed suit after their mail-in ballots were rejected by local officials who decided the signatures on the envelopes in which their ballots were returned were not theirs.

On Sept. 8, U.S. District Judge Orlando Garcia ruled that the state’s process for matching signatures “plainly violates certain voters’ constitutional rights,” and ordered the state to either abandon the practice or come up with some mechanism that lets voters get their ballots counted.

The injunction has been under an administrative stay by the Fifth Circuit since Sept. 11, three days after it was issued, and will now remain on hold while the state challenges the underpinnings of Garcia's decision.

Plaintiffs said they will now push counties to voluntarily give early notice to voters whose ballots are rejected for signature-match issues, allowing them a chance to rectify the situation and let their vote count.

“It will affect this 2020 election, so voters will not be notified in time, and so I think the main thing we’re trying to do now is notify counties that ballot boards are not required to give pre-election day notice, but they can,” said H. Drew Galloway, executive director of MOVE Texas, a plaintiff. “We encourage them to follow the original intent of the lower courts here so folks (whose ballots were rejected) can go vote in person, or contest that decision.”

Disclosure: MOVE Texas and the Texas secretary of state have been financial supporters of The Texas Tribune, a nonprofit, nonpartisan news organization that is funded in part by donations from members, foundations and corporate sponsors. Financial supporters play no role in the Tribune's journalism. Find a complete list of them here.