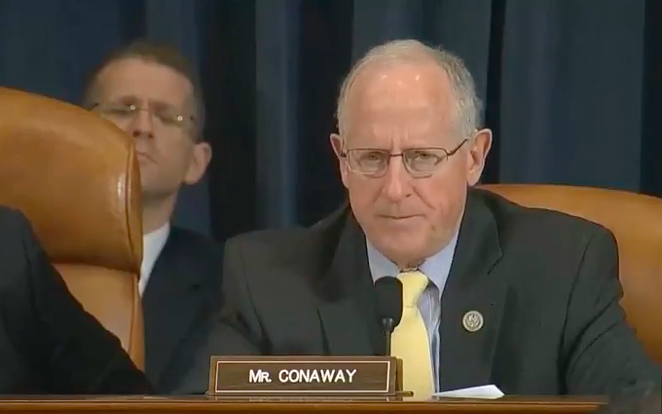 A Texas congressman who once compared Russian hackers to Mexican soap opera stars is now at the helm of the House Intelligence Committee’s investigation into Russia meddling with the U.S. election.

Congressman Mike Conaway, a Midland Republican, has replaced California Congressman Devin Nunes as committee chair, after Nunes' cozy relationship with the Trump Administration forced him to step down. But Conaway isn't exactly a neutral replacement. Often seen wearing a "Make American Great Again" cap during the presidential campaign, Conaway has been a emphatic Donald Trump supporter from the start, and he's already made his skepticism of the Russia election hacking claims clear.

A week before Trump's January inauguration, Conaway told the Dallas Morning News it was hypocritical for Democrats to be so upset about Russian interference in the presidential election.

“Harry Reid and the Democrats brought in Mexican soap opera stars, singers and entertainers who had immense influence in those communities into Las Vegas, to entertain, get out the vote and so forth,” Conaway told the News. “Those are foreign actors, foreign people, influencing the vote in Nevada. You don’t hear the Democrats screaming and saying one word about that.”

To Conaway, hacking into a country's Presidential election process was equal to a celebrity endorsement.

"That might work on Saturday afternoon when my wife’s Red Raiders are playing the Texas Longhorns,” Conaway said. “She really likes the Red Raiders ... but the logic is that because [Putin] really didn’t like ... Clinton, that he automatically liked Trump. That assessment is based on what?”

Conaway's also been critical of any anti-Trump rhetoric. Or, at least, been made very uncomfortable by it. He said the Woman's March was the "foulest, nastiest, crudest, crassest" protest, especially since women were "talking about female body parts."

But, despite his allegiance to the new president, he swears Trump "wouldn’t know me from third base." He told the New York Times that he has yet to meet the president one-on-one — something his predecessor, Nunes, couldn't say. On Thursday, Trump confirmed he has no idea who Conaway is, but showered him in typical Trump praise.