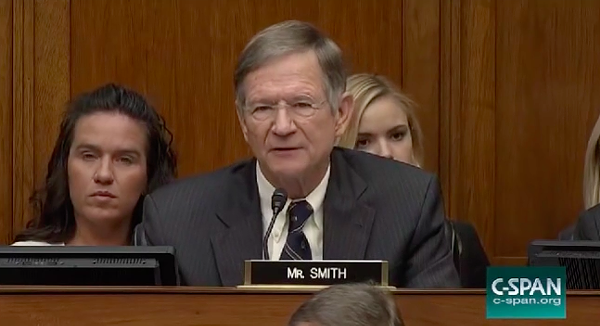 San Antonio Congressman Lamar Smith — the most vocal climate change denier on Capitol Hill — will not be running for re-election in 2018, according to emails obtained by the Texas Tribune.

Smith, a Republican, has represented Texas' 21st congressional district — an area including the Northeast side of San Antonio, Southwest Austin, and most of the Texas Hill Country west of I-35 — for 30 years straight.

"For several reasons, this seems like a good time to pass on the privilege of representing the 21st District to someone else," he wrote in an email obtained by the Tribune. "... With over a year remaining in my term, there is still much to do. There is legislation to enact, dozens of hearings to hold and hundreds of votes to cast."

Smith, a climate change denier, ironically chairs the House Committee on Science, Space and Technology. In this powerful position, he's accused scientific researchers across the world for falsifying data that proves that the world is warming — all while protecting the major oil and gas companies that directly contribute to climate change. Scientist organizations have called him a "modern-day McCarthy" for the way he's attempted to control the national narrative on global warming.

Smith was one of the first members of Congress to endorse Donald Trump in the presidential election — and has borrowed some of the president's rhetoric in committee hearings (one anti-EPA hearing came with the title: "Make the EPA Great Again"). Smith, a foe of the "liberal media," once said the only way to get the "unvarnished truth" is to get your news "directly from the president." Unsurprisingly, he's called reporting that documents climate change "fake news."

Less recently, Smith grabbed headlines for spearheading a 2011 bill called the Stop Online Piracy Act, or SOPA. Under the guise of fighting online copyright infringement, SOPA threatened the U.S. with sweeping internet censorship — and was ultimately extinguished. SOPA would had benefited companies like Verizon, Time Warner and AT&T, some of Smith’s top campaign donors.

Smith is the 12th House Republican to announce his retirement this term. In a Thursday conference call, Smith told reporters that the political climate on Capitol Hill had no impact on his decision to step down. In fact, he said Trump "deserves a lot more credit" for his work in the White House.

Aside from speculation, no one has announced interest in filling Smith's seat in the majority-Republican 21st District. But Smith said he's "confident it will be a Republican."