Remember the uninhibited joy of standing shoulder-to-shoulder in a concert crowd full of screaming, sweaty strangers? One minute you're recoiling from the drink spilled down your back, the next you find yourself embracing those around you, singing along to every word like it was written just for you.

For now, that's all gone.

COVID-19 turned the lights out for the music industry overnight, leaving musicians and performers unable to work and forced to pursue innovative ways of keeping fans engaged. Artists are facing the unprecedented challenge of releasing new music without the ability to promote it in live arenas. Instead, they're leaning on virtual platforms to drum up fanfare for new albums and singles.

For Texas country artists, the approach can't hold a candle to the thrill of connecting with a live audience.

"There is nothing more special than seeing people's eyes and watching them sing the words," Wade Bowen told the Current.

Bowen would know. Arguably one of the biggest names on the Texas country circuit, he his new album, Hold My Beer, Vol. 2 on Friday, May 8 in collaboration with fellow country artist Randy Rogers.

The New Braunfels-based duo, who each have their own respective bands, jointly recorded the album as a follow-up to 2015's Hold My Beer Vol. 1. They questioned the timing of releasing Vol. 2, considering it couldn't be supported by a tour with venues closed up. But the follow-up album was years in the making, and they felt the timing was right.

"This is a time when people are turning to music, and that's one of the reasons we chose to go ahead and push through," Bowen said. "We just got creative with it all. It's something like we've never done before, on so many levels."

Bowen hosts a Facebook livestream concert series on Friday nights called Wade's World Quaranstream. He used the platform to host an album release party, followed by Q&A about the record. The duo played songs from the album to an empty room at Cheatham Street Warehouse, the venerable San Marcos honky tonk.

On Memorial Day Weekend, Rogers and Bowen will take over Sirius XM Outlaw County on the satellite radio service's Channel 60.

"Seeing people's reaction to songs, that's why we make records — so we can have that experience of getting out and getting to make people happy in that way," Bowen said. "Not getting to do that is really hard."

Using virtual promotion, artist are divorced from the instant feedback of live shows, instead seeing responses when comments, questions, likes and loves flood social media. Bowen even published his phone number for further dialogue with fans, adding "it is definitely different and something that we have just found a way to be positive about."

Both Bowen and Rogers agree that the positive messages from the new album are something fans need right now.

"This record is about friendships and having fun with your buddies and the ones you love," Bowen said.

The album's title track "Hold My Beer" delves into Rogers and Bowen's longstanding friendship, as they trade nostalgic tales of rowdy Austin bar fights and chasing girls on the Sunset Strip. The song "AM/FM" takes listeners on a country drive, with a bobble-head Jesus on the dash, a cold one in the console and a "hot little pistol" riding shotgun.

The pair has tour dates on the books for late June, but they remain at the mercy of state officials on whether those will happen. In the meantime, Bowen said he's trying to stay connected to fans, playing his music in whatever way he can and enjoying not being road-worn. Hopefully, he says, "that translates into something really special when we go back." 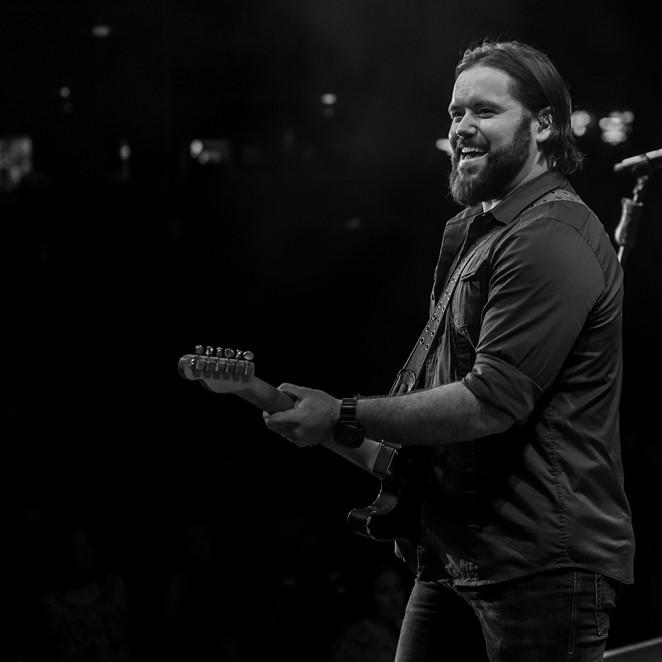 San Antonio native and rising country music artist Mike Ryan familiarized himself with the Texas Country music scene during his college years, consuming as many bootleg acoustic recordings he could find from bands such as Cross Canadian Ragweed, Stoney LaRue and Wade Bowen. Over the past ten years, he's launched his own career, releasing four albums with one more on the way.

He was a couple recordings away from finishing his fifth album when studios shut down in Nashville. While waiting, Ryan went ahead and released a second single off the new album, dropping "Ghost Town" on May 15.

"I kind of feel like a penned up bull," Ryan told the Current. "I've got all this new material that I can't go play to people, which is the best part."

Since releasing the new single, Ryan has played a full-band drive-in concert at Lava Cantina near Dallas. He's also been hosting livestreams from his back porch on social media.

But Ryan doesn't think a virtual connection to fans is comparable to performing new songs for a live audience.

"You can see your audience learn new songs, the song may have only been out for a couple of days and you already see people singing along — that's pretty cool," he said.

Introducing tunes to a barroom full of people is also a way to gauge which should be featured as the next single, Ryan explained. He wonders whether drive-in concerts and live-streaming will be artists' primary outlets for a while.

"There is a silver lining though," he added. "There are more people paying attention on social media, and there is an anticipation building from folks. So, I feel like whenever we do go back to work, everybody is going to make up for lost time."

Co-written with Brent Anderson and Neil Medley, "Ghost Town" reflects on the memories of a past relationship. The scene is set in an old boomtown, which parallels to fleeting moments in time. It follows Ryan's Texas radio hit "Dear Country Music," an ode to the honky tonk sound that shaped him.

The San Antonio star is scheduled to play at John T. Floore's County Store on June 5, but he's unsure whether more live shows are going to be part of the plan.

"'Til then, we've just got to keep riding, keep playing, stay on the social and keep putting out music," he said.