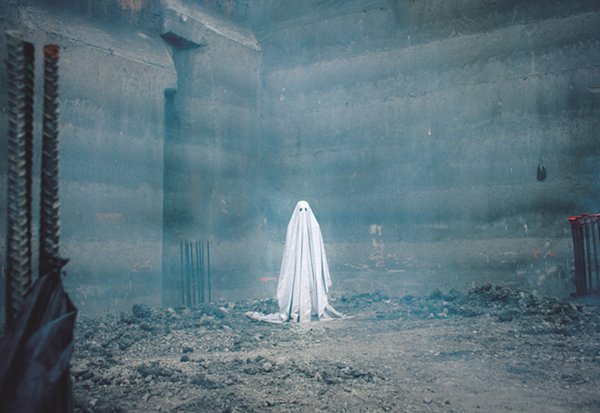 “We do what we can to endure,” says a pontificating hipster (played by the musician and sometimes indie-film actor Will Oldham) in a monologue delivered during a party that takes place in the house where a ghost (Casey Affleck) continues to reside long after his physical body has died. It’s a lengthy speech in a film dominated by long takes and very little dialogue. A Ghost Story is a movie constructed in meditative and poetic tones rather than the shock scares and creeping dread that characterize spooky-house movies as we generally know them. This is a ghost movie for the arthouse crowd, featuring an ethereal figure that’s decidedly low-tech and not a phantom dependent on CGI effects and eerie frights. The ghost here is manifested by an almost ridiculous white sheet that has black eye-hole cutouts, and the actor underneath the sheet for almost the movie’s entirety is none other than Academy Award winner Casey Affleck.

Affleck plays a character named C, who lives in an older, ranch-style house with his girlfriend M (Rooney Mara). He’s maybe a musician, which would help explain A Ghost Story’s fantastic (and, dare I say, haunting) score (overseen by Daniel Hart). M has made plans for them to move elsewhere and doesn’t understand C’s reluctance to leave the place. C dies early in the film before their scheduled move takes place, but somehow never departs the domicile. There’s a MacGuffin about a note hidden by M in a crack in the wall, but retrieving the note is less the reason for C’s continued residency than his desire to endure and have the love that once was made in this house endure, as well. Later scenes reveal some of the earlier and future inhabitants of the house (hence the hipster party scene), and fill the movie with a sense of temporality that’s porous and simultaneous rather than impervious and linear.

Viewers who are not on the movie’s wavelength, however, may find that time seems interminable. Long swaths of the picture pass with no words spoken, and it builds meaning through its accretion of images. In the end, the effect is poetic but not revelatory: A Ghost Story has no new insights into the human experiences of grief, time and love. An evocative, long-take scene of M acting out her grief through binge-eating a pie and then purging may seem at first like a creative way to demonstrate a person’s misery. Those who aren’t irritated by the unlikely sight of this skinny actress guzzling a pie in real time will, perhaps, later find themselves annoyed after devoting so much time to her sorrow — only to discover that she is only an incidental character in the story. The scene comes across as a stylistic fillip in writer/director David Lowery’s arsenal and not an intrinsic part of this ghost’s narrative. Other creative techniques Lowery employs — like the old-fashioned 1:37 screen ratio that has the visual effect of boxing in the characters — are more effective.

Texas filmmaker Lowery demonstrates his out-of-the-box thinking by telling his haunted-house story from the ghost’s point of view. It seems in his view that, even after death, spooks don’t give up the ghost of the human impulse to endure. Yet they, too, can lose their way, just like their living counterparts. Maddeningly, A Ghost Story can seem more like a creative exercise than a fully formed narrative construct.