Texas' Front-Line Workers in the Pandemic Are Predominantly Women and People of Color, Analysis Finds 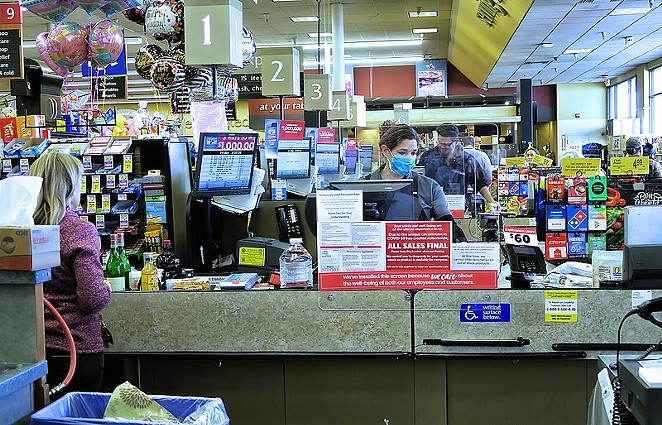 When the coronavirus pandemic began, school custodian Crystal Watts was working five days a week, mopping floors, wiping desks and disinfecting every surface that was touched. She didn’t get a mask.

Olivia Hill, a day care teacher, was given the choice to stop working when a child at the facility tested positive for the new coronavirus. She didn’t quit. She couldn’t afford to.

Watts and Hill, both from San Antonio, are among millions of front-line workers who have continued to work — cleaning buildings, stocking grocery shelves and filling prescriptions — even as COVID-19 has driven most businesses to shutter and residents to stay home.

In Texas and across the country, these front-line employees are predominantly women and are more likely to be people of color than other workers, according to an Associated Press analysis of U.S. Census Bureau data, released Friday.

Front-line workers, as defined in the analysis, work in six sectors: health care, building and cleaning services, social services, public transit, grocery, and delivery and warehouse. The category does not include all the government employees or first responders who are considered “essential” workers, a state designation for those whose work is too critical to stop despite stay-at-home orders.

Women held the majority of jobs in cleaning services and health care, and more than 80% of jobs in child care and community and family services in those 11 cities, as well as in 100 cities across the U.S. that have the most front-line workers.

Men are more heavily represented in front-line occupations like trucking, the postal service and public transit, and in fields often responding to emergencies, like police officers and firefighters.

Texas cleaves from other states on racial lines: Both the front-line and overall workforce are more likely to be people of color, particularly Hispanic, in the 11 Texas cities than in the 100 U.S. cities.

Experts say the numbers reflect a stratified economy in which historically undervalued jobs involving caregiving or domestic work are mostly held by women.

The figures are “not surprising,” said Elizabeth Gregory, director of the Institute for Research on Women, Gender & Sexuality at the University of Houston.

“You see that when you go to the grocery store or you go to the hospital or to see your health care provider. … You have women working in positions that are frequently low-paid positions, and they are not only having to go to work, but they’re having to put themselves at risk and are frequently burdened with all the extra work of child care,” she said.

That’s how Watts, the custodian, views it. She said it’s unfair that essential workers are not paid on par with people who “can do their job from home on a computer.”

Her hours have been reduced to one day a week, though her salary has increased to include hazard pay for the time she is at the school — where she’s now painting the facilities. The extra wages are appreciated, but they won’t save her life if she gets sick, she said.

“Not just money-wise but recognition-wise: It was like we were nothing. We’re at the bottom of the totem pole.”

Employees in some front-line fields are more likely to lack a social safety net than other workers, according to the data.

Those in the cleaning sector — including people who provide janitorial services and pest control — are more likely to be Hispanic, renters, noncitizens and foreign-born, and are more likely to have children at home than other workers, including those who hold other front-line jobs, the data shows.

They are also more likely to lack health insurance and to live below the poverty line — $26,200 for a family of four — than other workers.

Employees providing day care and other family services are also more likely to live below the poverty line, compared with workers in the 11 Texas cities.

Hill, the day care teacher in San Antonio, said her job has changed significantly since the pandemic began: There are masks, fewer kids and strict protocols on who can come and go.

But she’s grateful she still has work, even though her medically vulnerable dad has retreated to a ranch to self-isolate from Hill and her mom, both front-line workers.

“I was definitely worried about being able to pay my bills,” Hill said. “I do think we are essential because how are the nurses and health care workers and retail employees going to go and do their job if nobody’s able to take care of their kids?”

Health care professionals are among the most prominent front-line responders to the pandemic, and 73% of those infected by the virus have been women, according to an April report from the U.S. Centers for Disease Control and Prevention.

They include doctors and nurses, as well as home health providers like Anne-Leslie Tijerina, an occupational therapist who’s spent 35 years working with children at schools, at rural hospitals and now in homes.

Although she’s started meeting with some of her patients using tele-health, not all of them have internet access or insurance that covers the remote service. Some don’t want to sacrifice in-person care. When she does go to a patient’s house, it’s with gloves and a mask, which she promptly bags and discards after.

“We’re going to their homes so that we can get them better, closer to their age or developmental level,” she said. “We are essential in that respect: The child will lose ground if we don’t continue these interventions.”

Experts say “care” work occupations are often associated with women and are not valued economically.

“When women went into the workforce, all of the jobs that they were offered or encouraged to take were, at least in the early days, care work — like cleaning, cooking and teaching,” said Gregory, with the University of Houston. “The dynamic of the pay scale has always been linked to the fact that women did it for free at home anyway, so it never got the kind of status in the wider economy.”

In a dual-earner household with two essential workers, for example, the woman is more likely to “sacrifice part of her job” to pick up extra duties at home, said Frear, who studies careers and workplace diversity.

More employees will be heading back to work as soon as Friday, as Republican Gov. Greg Abbott allows retailers, restaurants and movie theaters to open at limited capacity.

Those workers risk increased exposure to the virus and face limited child care options, as schools are closed.

Licensed child care centers are open only for the children of essential workers, though people lacking child care can refuse to return to work and continue collecting unemployment benefits.

Christina Rodriguez, a waitress for 34 years, has mixed feelings about potentially returning to work at an El Paso Cracker Barrel in the coming weeks.

A self-described “people person” who is known among regulars, Rodriguez cried in March when was no longer scheduled for shifts. Now she’s still waiting for unemployment, has leaned on grown children for financial help and is burning through all her savings — and the phone lines trying to reach the Texas Workforce Commission.

But with a swelling number of coronavirus cases in El Paso, the 54-year-old Rodriguez is “literally scared” to return, and of accidentally bringing something home from work that sickens her mother, who lives with her.

Darla Cameron contributed to this report.