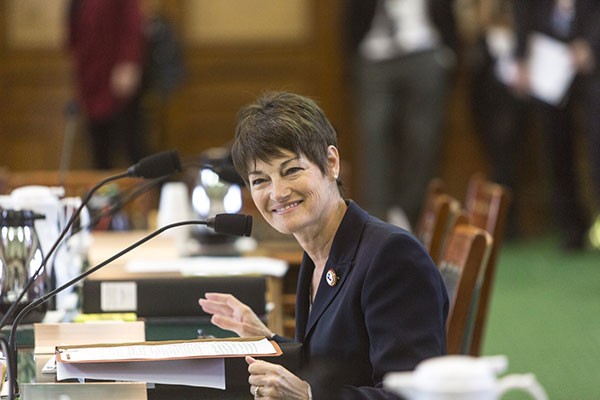 AUSTIN — The 2015 session of the Texas Legislature, which ended last week rather unceremoniously, was widely panned as a bust.

Immigrant advocates couldn't be any happier. They're claiming victory.

"We were very excited, but it kept us on our toes," Chloe Sikes, a member of the Coalition to Save In-State Tuition, told the San Antonio Current.

A slew of proposals cracking down on undocumented immigrants — from repealing in-state tuition to targeting disadvantaged children in medical care programs — died on the vine as time expired on their proponents.

Post-battle, those in the political trenches described behind-the-scenes machinations that dealt the fatal blows to the anti-immigrant bills. Scenes of high drama — suffused with broken loyalties, clash of wills, moral indignation — that would've made Shakespeare raise an eyebrow.

After spurts surfaced threatening to advance Campbell's bill, it finally died on May 20 after the deadline for discussion passed.

"It was extra concerning the repeal effort was put forth in this session," Sikes said. "Texas was the first to pass that type of legislation," she noted with palpable pride. Indeed, many other states followed in the Lone Star State's footsteps.

The mainstream media attributed the mass death of bills to the GOP focus on gays and guns. But battle-worn lawmakers who fought the latest anti-immigration bills described a wholesale change in dynamics from past sessions, prompted by the upending of the two-thirds rule in the Senate. In January, Lt. Gov. Dan Patrick ended the 70-year practice of requiring the support of two-thirds of senators to bring up a measure in favor of a three-fifths majority. The old rule was in place to protect minority interests, a less-than-opaque measure by Patrick to push his party's priorities.

"While it was definitely a loss for the Senate, it has empowered the House," said State Rep. Trey Martinez-Fischer, a San Antonio Democrat.

"The truth of the matter is there was no appetite for that kind of conversation in the state House, which is a more mature body," Martinez-Fischer added. "Most of those bills originated in the Senate, but died a slow and painful death on the House floor."

State Sen. José Menéndez, another SA Democrat, described a similar sense of empowerment in killing off bad bills — a rallying cry that even lured some Republicans to discreetly stray from party lines. The same three-fifths rule implanted this year now requires 12 senators to block a bill, prompting recruitment of dissenters across party lines.

"The Republicans who joined us think it's not in the best interest of the state to be anti-Hispanic and anti-immigrant and don't agree with those politics," Menéndez told the Current.

The turncoats' identities are being jealously guarded to shield them from potential backlash from their base in the next election cycle, Menéndez noted.

"We tried to provide them anonymity so they don't get beat up in the next primary election," he said.

The rise of the Tea Party and the intractable stance on social issues among its rank and file also increasingly complicates the way business gets done at the Legislature — prompting some Republicans dissenting from party ideology to quietly support Democrats with votes. "It's caused so many moderate Republicans to be kicked out by these far-right Tea Party members," Menéndez noted.

Rhetoric and slogans make for juicy red meat for the base, but they have nothing on business leaders who ultimately set the GOP's tone.

"At the end of the day, the business community is interested in cheap labor, particularly in the construction, hospitality and restaurant industries," he said. "This is not just this legislative session, but part of the culture of our politics forever."

Jillson invoked the trope of "campaigning in poetry and governing in prose" to further his argument.

"Texas has seen the value of a substantial supply of cheap labor. The anti-immigrant rhetoric and border security rhetoric is standard fare of elections, and that rhetoric is very effective," he explained. "But when you get into governing, you have the lobbies pushing in a different direction."

Whatever the reasons for the mercurial session, Sikes, the advocate, said she lived through the drama created by the changed dynamics during this year's session, with the gasps and spurts of SB 1819 as it threatened to come back to life.

The bill had an unconventional birth on April 6 as an extension of a Senate subcommittee hearing on border security. From there, it was placed on the Senate calendar on April 15, only to see it removed the next day but then placed on the calendar again on May 19. The next day, it was removed again, eventually dying as the deadline for discussion passed.

Martinez-Fischer acknowledged he and his counterparts must now work twice as hard as before, given the changed dynamics fueled by the suspension of the two-thirds rule. But past fights pre-dating that change inform his moves on the revamped battlefield, he suggested. In the previous session, he helped kill off a former iteration of the sanctuary city bill via a procedural maneuver.

"It was the most divisive debate we had, and I was able to derail it on a point of order that challenged the committee paperwork," he recalled. The ploy worked, delaying the bill's reintroduction long enough to prevent it from returning to committee.

Yet he and his fellow Democrats in Austin, along with immigrant advocates, know full well their victory is ephemeral.

"We've dodged a bullet, but let's see what they bring in 2017," Martinez-Fischer said.