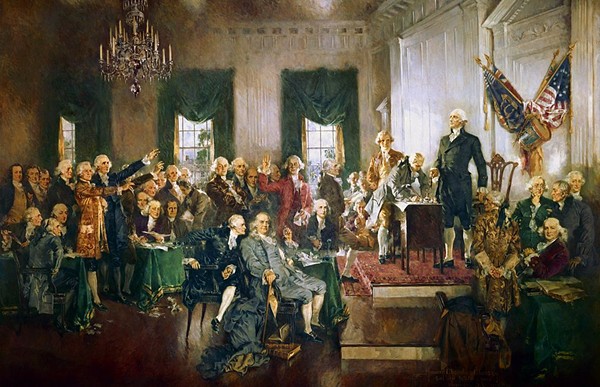 Maybe the thought of the Supreme Court calling same-sex marriage bans unconstitutional, paving the way for marriage equality, was just too much for him. Maybe it was Obamacare. Or maybe it was President Barack Obama's recent attempt to tighten gun control.

The reason probably doesn't matter because at this point suing the federal government and decrying Obama as a tyrannical maniac waiting in your closet to steal your guns when you go to sleep is as natural to Abbott as breathing.

Either way, Abbott's had enough and last week, he called for a Convention of States to to ratify the constitution with nine amendments that Abbott says would restore the balance of power between the state and federal governments, while reining in the federal government.

“The increasingly frequent departures from Constitutional principles are destroying the Rule of Law foundation on which this country was built,” Abbott says in a press statement. “We are succumbing to the caprice of man that our Founders fought to escape."

If he's referring to Obama here, it's probably the other way around. Obama's ancestors could have tried to escape the founders, who were slave owners. Pesky, details.

"The cure to these problems will not come from Washington D.C. Instead, the states must lead the way," Abbott says. "To do that I am adding another item to the agenda next session. I want legislation authorizing Texas to join other states in calling for a Convention of States to fix the cracks in our Constitution.”

Here's what the Litigator In Chief proposes:
You can read his full plan here: