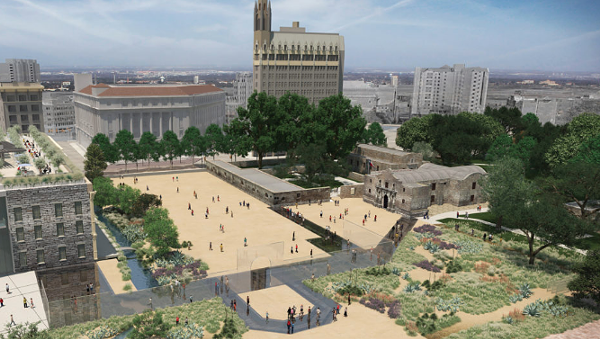 Texas has hired an outside consulting group to get statewide input on the future of the Alamo and its surrounding property.

PGAV Destinations, the St. Louis-based contractor, was selected by the Texas General Land Office to gather "cares and concerns" from unidentified communities across Texas and report back.

"As we move towards drafting designs of how the key concepts could take shape, the team will travel the state gathering input from those interested in contributing," said Land Commissioner George P. Bush in a December 11 press release. "While the expertise and experience of skilled contractors will be valuable, the people of Texas will continue to be the guiding force behind restoring dignity to the 1836 Battlefield, preserving the Alamo Church and Long Barrack, and building a large museum worthy of telling the story of the Battle of the Alamo."

It's only the latest move in a long-brewing push to make the Alamo more like its neighboring missions — a protected, "revered" landmark void of tacky gift shops and raspa stands.

In his announcement, Bush didn't mention that the Alamo Master Plan Management Committee (the local group tasked with the Alamo's so-called "reimagining") has already drafted designs of how they want the Alamo Plaza and surrounding property to look. Those designs, which included relocating the towering white memorial to Alamo soldiers and blocking off Alamo St. from traffic, were approved by City Council in May.

But it seems Bush, who's office has had ultimate control of the property since 2011, isn't satisfied with the current plans — or he's trying to appease the members of the state legislature who've criticized the project for being too secretive.

At least $75 million in state funds and $38 million in San Antonio taxpayers' dollars will be going toward the $450 million project. State lawmakers want to know where, exactly, their money is going.

In a December 5 hearing, members of Texas' Senate Finance Committee asked Bush why recent meetings on the sweeping redesign have been closed to the public and aren't open to records request through the state's Public Information Act. Bush, who is up for re-election in 2018, said he wasn't breaking any laws.

"Commissioner ... you can do it, you’re choosing not to do it," said Sen. Kirk Watson, regarding Bush's ability to hold public meetings. "I’m not sure who you are trying to protect; I think your first goal should be to protect the taxpayers of the State of Texas as they make a decision.”

Perhaps using that money to send PGAV Destinations on a Texas roadtrip will quell senator's concerns?