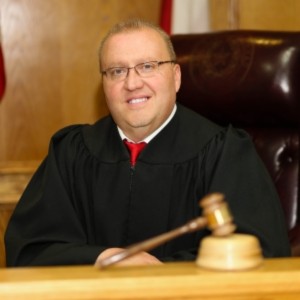 A Christian, an atheist, and a religiously unaffiliated person are suing a Montgomery County justice of the peace for opening his court sessions with a Christian prayer. No, this isn't the start to a bad joke — the three are arguing Judge Wayne Mack has violated their constitutional right to a religion-free government. And religious freedom experts seem to agree with their case.

According to court documents, Judge Mack has asked volunteer pastors to lead his courtroom in prayer since assuming office in 2014. Before beginning the often 8 minute-long sermon, Mack allows people "offended" by the ritual to leave if they so choose — and return when it's over. It's not mandatory, and participation won't affect a person's case, he insists.

Regardless, the plaintiff's attorneys argue his tradition still breaks the constitutional rule that "government may not...promote, advance, or otherwise endorse religion."

Two of the unnamed plaintiffs in the case — both regular attorneys in Mack's courtroom — said they fear that refusing to participate in prayer will cost them a fair trial or make their clients uncomfortable.

One of the attorneys is a Christian, but "objects to a government official telling her when or how to pray"— and has been intentionally avoiding Mack's courtroom because of the issue. The other attorney, who identified as religiously unaffiliated, believes publicly objecting to Mack's prayer will jeopardize his career. The third plaintiff, who's appeared in Mack's court several times for "official business," argues the judge's prayer sessions violate her rights as an atheist.

All three are represented by the Freedom From Religion Foundation, a legal nonprofit that specifically advocates for the separation of church and state.

"The primary effect of Judge Mack's courtroom prayer practice is to advance religion...through the machinery of the judiciary," write FFRA attorneys in a March 21 court filing, saying Mack's court "has become excessively entangled with an exclusively religious ritual."

This isn't the first time Mack's opening prayers have been challenged.

He was first handed a complaint in 2014, when an anonymous plaintiff in a case in Mack's court sent FFRF an email. The plaintiff wrote that during the court prayer, he "felt that the Judge was watching for reactions from the courtroom."

"I was very uncomfortable and certainly felt that I was being coerced into following this ritual," he went on. He believed the outcome of his case rested on whether or not he participated in the prayer. Shortly after receiving this letter, the FFRF sent a letter to Mack, asking him to immediately end courtroom prayers.

Instead of responding, Mack used the letter to promote a fundraising event. "We have come under national and local attack from those that believe that God & Faith has no place in public lives," he wrote in an email inviting the public to buy tickets to his annual Prayer Breakfast. FFRF filed a complaint with the state Commission of Judicial Conduct — but nothing came from it, aside from a gentle warning from the state over a year later.

Now, FFRF has returned with a larger arsenal of complaints — and a lawsuit. Which is catching the attention of top state officials.

Last week Attorney General Ken Paxton issued a statement supporting Mack's prayer, pointing to a Supreme Court case that allowed a New York town to start its monthly board meetings with prayer. FFRA attorney Sam Grover, however, told the Houston Chronicle it's an false comparison because this case involves a judge and how he runs his court.

The AG's interest in the case isn't surprising — Paxton has made a name for himself fighting for the religious freedoms of Christian Texans since entering office. Just last week, Paxton attacked a Frisco high school for designating a campus prayer room, since he incorrectly assumed it was only for Muslim students. But in December, when a Kileen school district banned a teacher from posting Bible quotes on her classroom door, he ran to her defense. Governor Greg Abbott and Lieutenant Gov. Dan Patrick are equally passionate about protecting religious freedoms, at least for Christians.

That's why Abbott supported Texas police departments sticking crosses on the back of their cruisers and why Patrick thinks the anti-transgender Senate Bill 6 protects Christians from having to support LGBT people.

In February, Patrick said the case against Judge Mack is just a "bow to political correctness." We'll have to wait and see what the courts think.