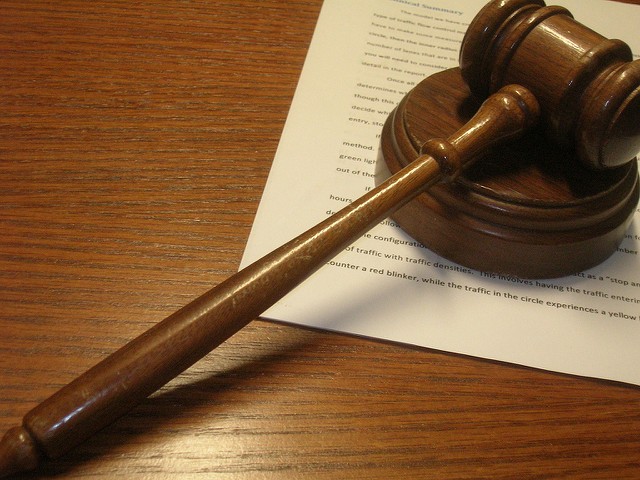 Appointed to the Western District of Texas by President Ronald Reagan in 1984, Walter S. Smith Jr. quickly developed a reputation as one of Texas' harshest federal judges. People who worked with him knew he had a temper.

That's what a former clerk in Smith's Waco office says she had in mind when he forced himself on her in the late 1990s. After harassing the woman at work one morning, Smith called her into his office, wrapped his arms around her and shoved his tongue down her throat as he pressed his erection into her, according to a deposition the woman gave in 2014. He tried to direct her toward the couch even as she pulled away and kept saying no.

“I just panicked, and all I thought about was his anger, you know," the woman testified. "And I was like, 'how am I going to get out of here without making him angry.'"

A panel of judges with the federal Fifth Circuit appeals court began investigating Smith after a Dallas lawyer named Ty Clevenger filed a complaint against the judge in 2014. Clevenger wants Congress to impeach Smith for his conduct toward women in his office. In late 2015, the Fifth Circuit judges didn't recommend impeachment, but rather handed Smith the super serious punishment of barring him from hearing any new cases for a full year. They've also asked that the court's so-called Judicial Council keep investigating Smith for allegations of additional sexual misconduct.

But as the Express-News first reported yesterday, Smith, 75, submitted his resignation to President Barack Obama last week. Which means that, as a retired federal judge, he'll draw an annuity equal to his current salary of $203,100 per year – for the rest of his life.

When the committee of Fifth Circuit judges reprimanded Smith last year, they concluded that the judge had engaged in “inappropriate and unwanted physical and non-physical sexual advances" toward a female coworker. If you believe the victim of those "advances," that's quite an understatement.

According to statements the woman made during a 2014 deposition, it all started when Smith said hello to her one morning in 1998 as he was entering the courthouse — something that seemed only a little strange at first because she’d hardly ever seen the judge before, let alone talked to him. Also: his breath smelled like liquor.

After telling her good morning and asking how she was doing, Smith asked the woman to swing by and see him in his office sometime. It got even weirder when the judge called the woman immediately after she sat down at her desk upon returning from lunch later that day. “Where have you been? … I told you to come see me,” she recalled him saying. Smith told the woman to walk down the hall and tell his secretary she needed to see the judge. The woman thought that maybe Smith wanted to talk about a promotion – he was, after all, looking for a new courtroom clerk.

Instead, according to her deposition, “He basically came over to me and put his arms around me and kissed me, and I just froze. I couldn’t move. And he said, ‘Let me make love to you.’” She told him that was a stupid idea. In return, “he pulled me to him again, and he kissed me again and stuck his tongue down my throat, and he pressed himself against me. I could tell he had an erection, and he said, you know, ‘A couch right here.’”

The woman says she thought about Smith's reputation for having a temper. Considering he also seemed and smelled drunk, the woman says she struggled with what to do. Meanwhile, Smith started to grope her. According to the deposition: “I just remember he just put his arms around me, around my back, then lower. And then he started to try [to] touch my breasts, and I kind of pushed away.” The woman ran through excuse after excuse until she finally broke away, walked out of Smith's office and sat down at her desk. She still asks herself why she wasn't more direct. As she said in her deposition, “I was just trying to keep him from blowing up at me."

The woman's story would be alarming enough if it ended there. It doesn't. The woman says Smith called her at her desk later in the day, asking her to take a couple of days off work. He wanted to take a trip with her. He told her he’d make sure she would get paid time off. Before coming into work the next day, the woman called her supervisor to tell him about Smith's actions. She begged her supervisor not to leave her alone with the judge. She was scared because Smith apparently wouldn't take no for an answer.

When the woman got to the office later that day, Smith had left a dozen yellow roses on her desk. Smith was calling as soon as she sat down (she figured he’d watched her walk into the building). “Where have you been?” he asked her, according to her deposition testimony. “I’ve been waiting for you here all day.” She told Smith he shouldn’t have sent her the roses. She says he told her, “I just had to.” Later that day, he managed to get her alone in her office by sending her supervisor on an errand.

It was a Friday, and later that afternoon, Smith again called the woman at her desk. He asked what she was doing that weekend. She said she was spending it with her grandparents. Before he left the office for the day, Smith left a note on the woman’s desk saying, “I hope you have a pleasant weekend.” She went into the office that weekend, grabbed her belongings, and left the flowers on the empty desk. A coworker would later tell her that Smith just let the flowers sit there and die.

Within hours of the woman telling her supervisors she was quitting, she says higher ups in the clerk’s office offered her six weeks leave with pay in the hopes that she’d reconsider at the end of it. She said in her deposition that, while she was on leave, she got a strange call from Smith’s law clerk. He claimed Smith had been in the hospital, and that he was so distraught, he couldn’t come into work.

The complaint eventually reached Harry Lee Hudspeth, who was then chief judge of the Western District of Texas, which is anchored in San Antonio (Hudspeth is now listed as a Senior U.S. District Judge in Austin). The woman claims that Hudspeth ultimately called her. He was dismissive throughout the call, she claimed. He didn’t ask a single question about the actual assault or Smith's behavior toward her in the workplace. “It was ugly,” she said of the call. “It was disrespectful. It was demeaning.”

The woman actually did try to go back to her job but quickly realized she couldn't remain on the same floor as the judge who called her into his office, attacked her in his chambers, and then continued to harass her. “I had a fear of walking out into the hall and running – running into him," she testified.

Last year, the Fifth Circuit's judicial council found that “Judge Smith does not understand the gravity of such inappropriate behavior and the serious effect that it has on the operations of the courts.” They added this curious line: “The Judicial Council also finds that Judge Smith allowed false factual assertions to be made in response to the complaint."

Meanwhile, Smith's victim says it wasn't just her career that was affected by the federal judge's actions. "It's affected me pretty badly," she said during her deposition. "I went into a pretty deep depression. I had to be hospitalized. It's just caused a lot of stress in my life."