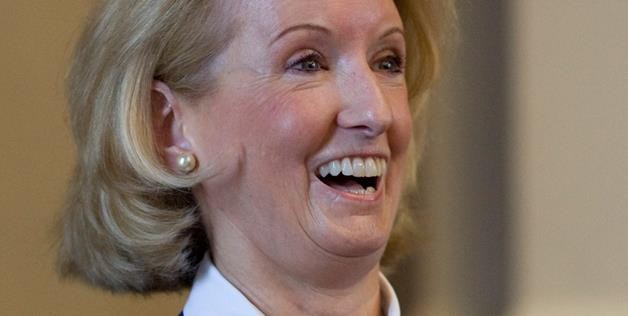 When Adolf Hitler took over Europe, he and his evil cronies built a deadly network of concentration camps where jews and minorities were systematically killed in horrible ways — women, children, boys, men and the elderly were all victims.

Approximately 11 million people were murdered during the Holocaust.

Somehow, anti-abortion crusader Rep. Jodie Laubenberg managed to compare the Nazi regime's atrocities to a woman's right to have an abortion.

Here's what she said at a rally sponsored by the Texas Alliance for Life, as reported by the San Antonio Express-News.

“To find out that this culture of death is now leading to the sale – this is no different than what happened in Nazi Germany," said Rep. Jodie Laubenberg, a Parker Republican who is a leading anti-abortion lawmaker, at the rally sponsored by the Texas Alliance for Life. "No different than doing the experiments on the old men and old women and now doing them on the babies. And I am so proud that Texas always takes the lead in trying to turn back what started with Roe v. Wade."


Her comments come after a controversial right-to-life group secretly recorded Planned Parenthood discussing the donation of fetal tissue, which is legal, and associated fees related to possible donations.

Here's what Cecile Richards, president of Planned Parenthood Federation of America has to say about those videos:

Planned Parenthood provides a full range of health care services to millions of women, men, and young people every year, including cancer screenings, birth control, STD testing and treatment, and abortion. And we provide much more than health services – we support millions of people as they build their futures and pursue their goals.

I want to be really clear: The allegation that Planned Parenthood profits in any way from tissue donation is not true. Our donation programs – like any other high-quality health care providers – follow all laws and ethical guidelines. Over our 100-year history, we have continually engaged leading medical experts to shape our practices, policies, and high standards – and always will.

Our top priority is the compassionate care that we provide. In the video, one of our staff members speaks in a way that does not reflect that compassion. This is unacceptable, and I personally apologize for the staff member's tone and statements.


Perhaps Laubenberg is really the victim here — a victim of Godwin's Law, which postulates that the longer a discussion happens online, the greater the chance that someone will make a Hitler or Nazi analogy. However, reality has failed Laubenberg and it looks as if Godwin's Law is in play in real life for the legislator.

Meanwhile, dozens of demonstrators gathered at the Planned Parenthood on Babcock Road to protest the reproductive health center as part of a larger nationwide protest, according to the San Antonio Express-News.