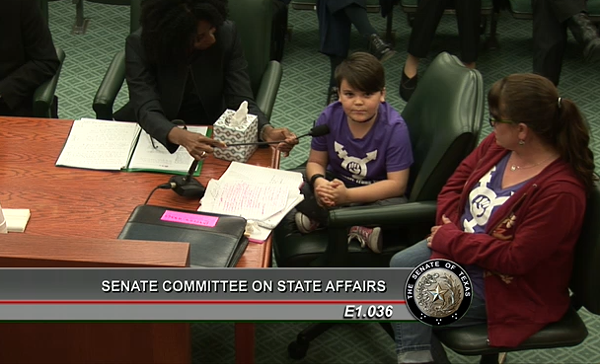 Only 29 of the nearly 300 people testifying on Senate Bill 6 at the capitol building Tuesday (and five hours into Wednesday morning) thought it was a good idea. But by 6 a.m., the Senate State Affairs Committee had voted 8 - 1 to pass the anti-trans "bathroom bill" forward to the full Senate.

It appeared most committee members had made up their minds about SB6 before the hearing even began. SB6, penned by Republican State Sen. Lois Kolkhorst, would block trans Texans from using public restrooms that match their gender identity. Kolkhort has maintained her bill would protect children in school bathrooms and locker rooms.

Despite hours of testimony from doctors, psychologists, advocates, parents and trans Texans explaining just how unnecessarily detrimental SB6 would be for the trans community, senators continued to brush off the idea it had anything to do with them. Instead, many committee members insisted the bill would simply protect "your daughters from predatory men" who may pretend to be trans to gain access to school bathrooms or locker rooms (there is no evidence of this criminal scenario ever taking place in Texas).

"The transgender issue keeps coming up," said Sen. Kolkhorst, appearing confused by the number of people calling SB6 anti-trans in their testimony. She argued that her "privacy" bill doesn't impact policies meant to combat discrimination in employment and housing, like North Carolina's House Bill 2 (which many say SB6 was based on), but rather only clarifies who's allowed to use restrooms in public schools and government buildings. Sen. José Rodríguez, an El Paso Democrat, hinted at how state Republicans seem to be fine with one type of discrimination but not the other.

“In ways, yes," Kolkhurst replied. She leaned heavily on how SB6 will supposedly protect school children, apparently unfazed by the voices of those who'd be most affected by the bill: trans kids.

"This bill is horrifying," said Marilyn, a transgender girl from Dallas around 10 years old. Her mother, Chelsea, said Marilyn had identified as a girl since she could talk. She'd always felt welcome in the girl's bathroom.

"Her only problem going to the bathroom at school was looking out for the girl in purple shoes that told her she was disgusting every day," Chelsea told the committee, through tears. Marilyn handed her a tissue. "We all vote and we may not have voted for you, but I need you to know this bill would be devastating for my daughter."

Another trans girl around the same age as Marilyn, named Rose, told senators about a time she used the men's room and a boy had climbed up and peeked over her stall. "It did not feel right. If I ever go into a boy's room again, it will bring up the same memory again and again," she said.

Anna Eastman, a trustee with Houston ISD (the state's only school district t0 come out against SB6) said she'd received no complaints about the district's current bathroom policy that allows trans kids to use the bathroom they identify with. "Don't require us to adopt policy that goes against what is working in our district," she asked the committee.

Colt Keo-Meier, a Houston-based psychologist and trans man, reminded the committee that their anti-trans fears are nothing new — people have been weaving myths about predatory members of the LGBT community for decades. “Do you remember when it used to be illegal for a gay man to be in schools?” he asked.

Sen. Eddie Lucio, the only Democrat who voted for SB6, took offense when Keo-Meier equated the bill's policy to segregation. “I am against segregation, okay? I lived through the civil rights era, which you did not. This is nowhere close to that," he declared. "I embrace all human beings. Thank you very much.”