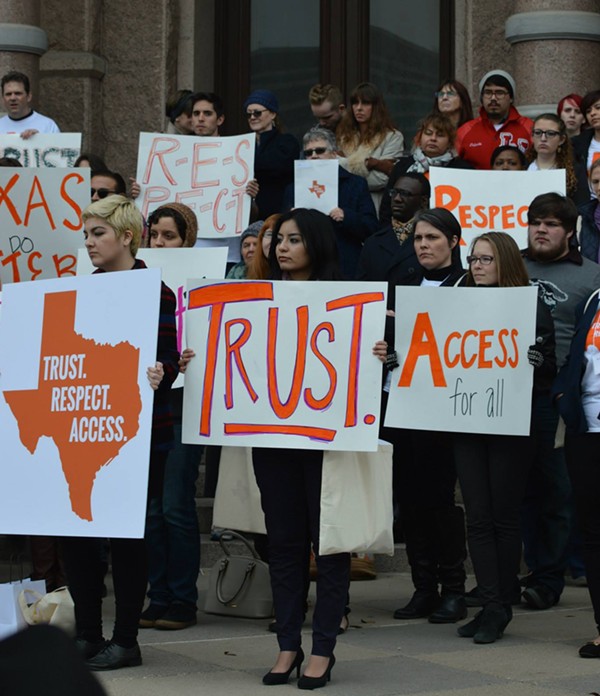 A Central Texas legislator named Marsha Farney authored a bill being debated today that would require Texans to purchase separate "abortion insurance" in advance of a procedure. Her plan is to ban abortion coverage from health insurance plans, including abortion procedures for victims of rape or incest, or because of fetal anomalies.

“A Texan’s health and safety should come before politics. Many things can happen in pregnancy that are beyond a person’s control, so it’s important to make sure everyone has coverage for the health care they may need,” Heather Busby, executive director of NARAL Pro-Choice Texas said in a press release. “It is wrong for politicians to single out a legal medical procedure just because they are personally opposed to it.”

Be sure to visit NARAL Pro-Choice Texas on Twitter for updates.

Jeni Putalavage-Ross aborted her fetus at 21 weeks, which had multiple anomalies and wouldn't make it to term or would die after birth. Busby said Farney's bill would hurt people like Putalavage-Ross.

“I was a newlywed excited about my first pregnancy. I wouldn’t have bought an insurance rider because I wasn’t planning on having an abortion, I was planning on starting a family,” Putalavage-Ross said in a NARAL Pro-Choice Texas press release.

Her medical costs neared $67,000, but because she had insurance, Putalavage paid $1,400 out of pocket, according to NARAL Pro-Choice.

“If my insurance hadn’t covered the majority of the medical costs it would have been a huge financial hardship and I wouldn’t have been able to afford to start the family I have now,” Putalavage-Ross, a mother of three, said. “If this bill passes it will devastate Texas families.”