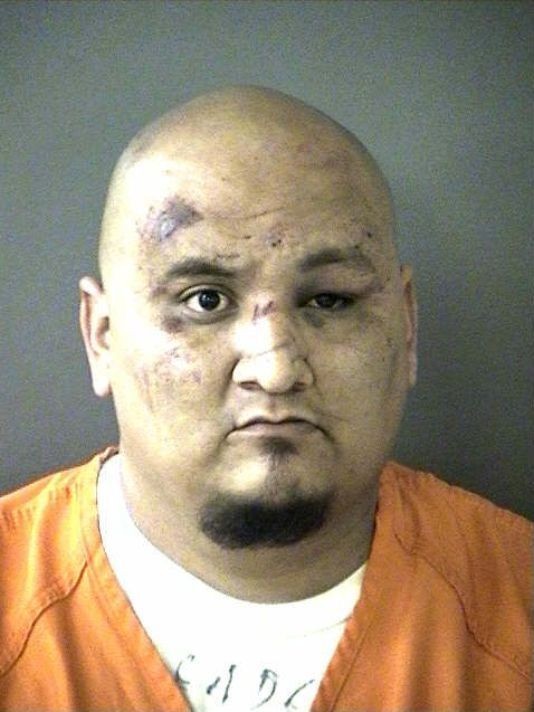 Ruben Reyes, the 38-year-old Texas Mexican Mafia "Lieutenant of Lieutenants" who pleaded guilty to ordering the murder of a Balcones Heights police officer in 2014, will spend the rest of his life in a maximum security prison.

On Wednesday, a San Antonio federal judge sentenced Reyes, nicknamed "Menace," to five consecutive life prison terms for killing four Texas Mexican Mafia members and ordering a hit on Julian Pesina, a crooked Balcones Heights cop who also claimed to be a gang member. Pesina was gunned down in May 2014 outside his Notorious Ink Tattoo and Piercing Studio.

Prosecutors say Reyes began to climb the ladder of the organization in 2013 after he murdered a fellow gang member suspected of snitching to federal agents. By January 2014, according to federal prosecutors, Reyes had been tasked with orchestrating the killing of three top gang commanders who'd angered the rest of the TMM leadership. Earlier this year, Reyes pleaded guilty to charges he lured gang members Mark Anthony Bernal, Carlos Chapa and Johnny Solis (nicknamed "Lefty," "Worm," and "Smiley," respectively) into a trap, shot them to death, and then dumped their bodies in a pre-dug grave somewhere in Pearsall.

Reyes also pleaded guilty to charges he ordered Pesina's murder later that year. Prosecutors have alleged that Pesina claimed membership to the gang, sold their drugs and payed them a "dime," or street tax the gang collects. When the gang found out Pesina was also an officer, Reyes ordered three other lower-level members to murder him outside his tattoo and piercing shop.

It appears Reyes only began cooperating with law enforcement because of threats on his own life coming from inside the gang. Prosecutors say that on November 9, 2014, four unknown men came to Reyes' home, knocked on the door and opened fire when he answered. At least one bullet struck him in the back, sending him to the hospital. According to court records, Reyes called the San Antonio Police Department a few days later to report the attempt on his life, and eventually gave investigators information about multiple unsolved murders around San Antonio.

Reyes also spilled details that led police to the Pearsall grave where he'd buried three of his victims.

In a statement Wednesday, U.S. Attorney Richard Durbin said, "Reyes was aptly nicknamed." The judge on the case has recommended Reyes be sent to the federal "Supermax" prison in Florence, Colorado.