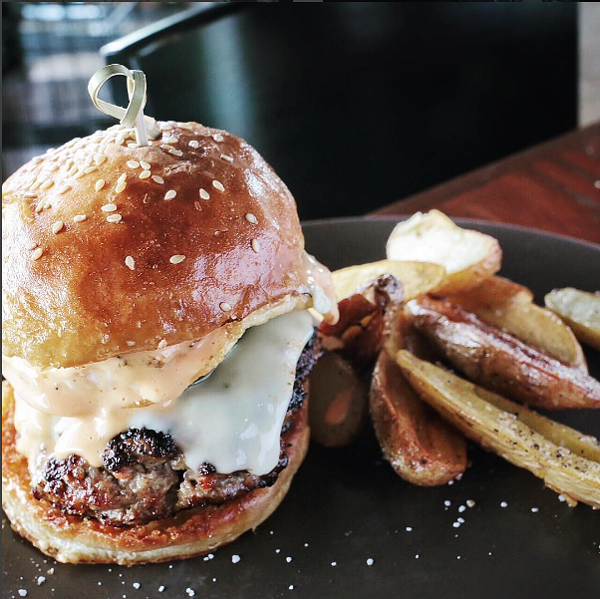 The competition — which the publication hadn't tackled in more than seven years — lists the 50 greatest hamburgers in the state, ranking the top five and the listing the remaining 45 alphabetically. The Olmos Park eatery took highest honors for its $18 hamburger ($11 without the pork belly), followed in order by the Congress Burger at Second Bar + Kitchen in Austin (No. 2), the L.U.S.T. Burger at the Bearded Lady in Fort Worth (No. 3), the Pimento Cheese Burger at Knife in Dallas (No. 4), and the Philly Cheese Steak Burger at the Original Hubcap Grill in Houston (No. 5).

The burger, a multi-tiered work of art nestled between two divinely buttery buns, comes draped in white American cheese and alongside roasted fingerling potatoes. The luxurious patty features a 70-to-30 meat-to-fat ratio, making the unctuous bite smooth all the way through, save the crunch of a fried egg and the pop of a pickle.

Though the restaurant’s atmosphere is communal and unpretentious, chef Luis Colon, who has served time in esteemed kitchens such as Grant Achatz’s famously boundary-breaking restaurant Alinea, has mastered the art of making nuanced, meticulously composed food feel comfortable. His green pea toast and fried chicken have been the subject of much admiration, the Brisket Burger will now own the spotlight, so get to the restaurant before the lines do.

Other notable San Antonio winners include (in no particular order): the Blue Ribbon Burger at Cured, the Burger at Rebelle, the Quarter Pounder with Cheese at T.J’s Hamburgers, and the Zinc Burger at Zinc Bistro and Bar. An honorable mention was given to the Norteño Burger at Pollos Asados Los Norteños.