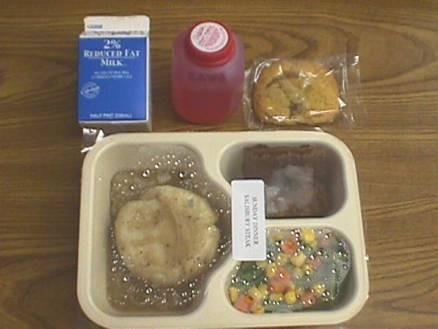 This year, the cost of crime got more risky. Break the law, be sentenced to serve time in any number of prisons in Texas, and you may end up rather hungry. That’s not due to the quality of food (which is always questionable at best), but because some prisons across the state have come up with a way to cut costs that also doubles as an ingenious crime deterrent: don’t give inmates lunch. Yes, believe it or not, the Texas prison system’s latest budgetary plan quite literally involves withholding meals -- all to keep within the black. Since April, the state of Texas has been serving prisoners only breakfast and dinner on the weekends. Nearly 23,000 inmates in 36 prisons are eating just two meals a day; Saturday and Sunday meals involve a very early “brunch” between the hours of 5 and 7 am, and a dinner between 4 and 6:30 pm. Even if prisoners were to eat the latest breakfast and earliest dinner, the time lapse between the two meals would still be a staggering nine hours. The Texas prison system officials say they have consulted with dieticians and other medical professionals to get the a-OK. But, one can hardly believe any reasonable nutrition practitioner would recommend shoveling in as much food as possible in the morning, only to spike blood sugar, and then have inmates suffering the slow and long descent into hypoglycemia over the next nine hours. Officials say prisoners will, however, be allowed to purchase chips and other snack items from commissaries. Nutritionally speaking, this adds up to disaster. Replacing one mid-afternoon meal with empty calories, trans fats, and chemicals means the brains, moods, digestive systems, and hormones of prisoners will be operating at sub-par levels, probably causing lethargy, moodiness and irritability, and increased cortisol levels, at best. It’s all an effort to cut $2.8 million in food expenses from the 2011 fiscal year budget of the Texas Department of Criminal Justice (the state’s prison agency). Additionally, the agency has replaced the last vestiges of real food: carton milk for powdered milk, and sliced bread for many grain meal components. Cutting lunch -- or, starvation, as critical thinkers would call it -- suggests neither the short- or long-term health of inmates is of any concern. “Extensive consultation with T.D.C.J.’s [Texas Department of Criminal Justice's] health services department and system dieticians prior to implementation of this plan have allowed us to avoid any medical issues,” Michelle Lyons, spokeswoman for the Texas Department of Criminal Justice, told the Times in a statement. As the news leaked this week, Texas seems to be in hot water. Opponents are speaking out against the changes, including inmates themselves. In August, several inmates at the Hutchins State Jail near Dallas signed a petition to send the Texas American Civil Liberties Union, claiming that such food cutbacks are a violation of the federal Constitution. But sympathy for the prisoners plight may prove limited; as State Senator John Whitmire (Democrat) said, “If they don’t like the menu, don’t come there in the first place.”