Texas Promised More Coronavirus Testing, but It's Unclear How Many Have Been Screened So Far 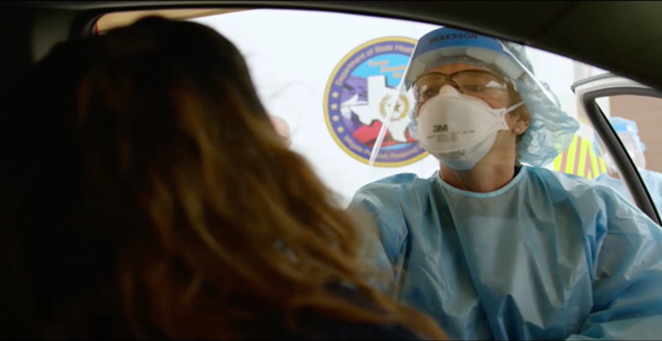 Despite a pledge by Gov. Greg Abbott that Texas is putting COVID-19 testing into high gear, the Texas Tribune was unable on Monday night to obtain firm figures from the state about how many people have actually been tested.

Public and federal labs have so far tested just 439 people for the illness, according to numbers shared late Monday by the Texas Department of State Health Services. That does not include “hundreds” more tests conducted by private labs, officials told the Tribune.

The Tribune's estimate puts the overall figure at more than 700 people — in a state with nearly 30 million residents. However, the news organization could not obtain an exact count from state officials.

At a news conference in San Antonio on Monday, Abbott promised that by the end of the week, drive through testing centers such as at least one operational in the Alamo City would help the state test more than 10,000 people weekly.

But, for now, the tests are reserved for people the state deems high-risk.

The sluggish screening numbers come as people are being turned away when they request tests. In reports by the Tribune and other media outlets, patients — some with worrying symptoms — describe being shuffled from one agency to another to get approval.

On Saturday, Texas Monthly reported on a mother who faced a runaround to get her 4-year-old child tested for the virus even though he had a fever and had recently been exposed to a family friend evacuated from the part of China that was the initial hot zone for the outbreak.

Another woman, who identified herself only as Sarah to protect her privacy, told Texas Monthly she was unable to obtain a test even though she had symptoms and worked as a school teacher around kids and elderly coworkers. At the time of the article, she was self-quarantining.

“This violates everything that you’re supposed to do in terms of a gold-standard approach to a pandemic,” Sarah said. “The constant covering-up and not owning up to the fact that [Trump] did a bad job, it’s really sad and disappointing.”