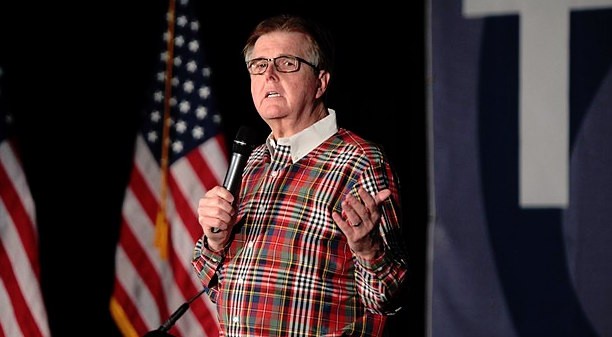 After a Democratic National Convention that raised questions about its limited roles for Texans, the state's Republicans kept a light footprint at their national gathering this week — and seemed just fine with it.

While Democrats emphatically argue that the state is in play this November — and polls back them up — Republicans are trying to avoid fueling the narrative and often push back on it. And with a dearth of Texas politicians in the Republican National Convention lineup and Hurricane Laura overshadowing its final two days, the political spotlight on the state turned out to be even dimmer than expected.

Going into the GOP convention, Lt. Gov. Dan Patrick, who chairs President Donald Trump's reelection campaign in Texas, said the lack of Texas speakers showed Republicans were not worried about the state. And during a conference call Tuesday, he stuck to his prediction from earlier in the cycle that Trump would build on his 2016 margin of victory in the state, which was 9 percentage points.

"I think it's very possible he can go over into double digits this time," Patrick said, later predicting that Trump would end up carrying the state by 10-13 points.

While every recent public survey shows a tighter race, Patrick's prediction reflected the confidence that Trump's Texas allies are voicing at least publicly ahead of November, when their challenges stretch far below the top of the ticket. Republican U.S. Sen. John Cornyn has a competitive reelection campaign, national Democrats are targeting 10 GOP-held U.S. House seats — they added their three latest targets Wednesday — and the Texas House majority is on the line.

For Texas Democrats looking to show the state is up for grabs, it was much more imperative that their presence was known in their national convention lineup, and state party Chair Gilberto Hinojosa in particular had pressed for better representation. The DNC ended up featuring prime-time appearances — some briefer than others — by at least four elected officials from Texas: U.S. Colin Allred of Dallas, U.S. Rep. Veronica Escobar of El Paso, Harris County Judge Lina Hidalgo and state Rep. Victoria Neave of Dallas.

The only Texas elected official to speak during prime-time GOP convention programming was rising-star U.S. Rep. Dan Crenshaw of Houston, and his remarks came early Wednesday night. Speaking from the deck of the Battleship Texas in La Porte, the former Navy SEAL gave a mostly apolitical speech, beginning with a story about a friend who helped save his life eight years ago in Afghanistan.

"Here’s the truth about America: We are a country of heroes," Crenshaw said. "I believe that. So should you.”

While Crenshaw spoke loyally to the theme of the night — America's heroes — he did not mention Trump by name at all, though he did hail the military's persistence in the fight against the Islamic State terrorist group and "our president having their backs." Crenshaw has a competitive reelection race on his hands this fall — and as an up-and-comer who has already gotten buzz as a potential future presidential contender, he may be thinking about the the party after Trump.

Outside of prime time, Cornyn made a brief appearance as part of a "candidate spotlight" series during a convention pre-show Thursday evening. He echoed a message he delivered at the state GOP convention last month, saying that Texas Republicans are "facing our greatest election challenge in the last five decades" but are not ready to give up and "don't just want to win — they want to win big."

There were at least two speakers with Texas ties who spoke in prime time, though by all appearances their inclusion was less about Texas than their individual causes. There was Abby Johnson, the anti-abortion activist who once worked at a Planned Parenthood clinic in Bryan, and Jack Brewer, a Black ex-NFL player who grew up in Grapevine and used his speech to argue that Trump is not a racist.

For the second RNC in a row, Gov. Greg Abbott opted against attending and tapped Patrick to chair the delegation, which was limited to six in-person participants this year due to the coronavirus pandemic. In 2016, Abbott was recovering from burns he had suffered on vacation, while this year, he cited the need to remain in Texas to continue to respond to the pandemic.

But even Patrick could not see this year's convention through. With Hurricane Laura approaching the Texas coast as a Category 4 storm, Patrick announced Wednesday that he was leaving the convention early to head home, missing that evening's program as well as Trump's renomination acceptance speech Thursday night.

By Thursday morning, Abbott and Patrick, as well as Cornyn and his Senate colleague Ted Cruz, had all traveled to Orange — a city on the Texas-Louisiana border — to survey hurricane damage and brief the media.

Two days earlier, Patrick held forth on the conference call about why he believed Trump would still win Texas by double digits. He said he would have predicted a Trump victory by 6 or 7 points several weeks ago but now sees that lead widening after the conventions brought into relief the differences between the two parties. He also said violence and destruction stemming from anti-police brutality protests in some Democratic-led cities have "totally changed the race," convincing "soccer moms" and independents to come off the fence.

Polls continue to show a close race for the White House in Texas, and the state Democratic Party released another one at the start of the GOP convention to press the storyline. While the Democratic presidential nominee, Joe Biden, has called Texas a battleground and his campaign has made TV ad reservations here this fall, the Trump campaign has scoffed at the idea the state is in play and dared Biden campaign to dump money into the state.

Texas was clearly on Trump's mind as he delivered his first set of remarks at the convention Monday morning. He mentioned the state multiple times and at one point asserted that if George Washington came back from the dead and picked Abraham Lincoln as his running mate, "you’re not going to win the state of Texas if you have no oil, no guns and no religion."

The Texas Democratic Party was ready with a retort, noting the high coronavirus toll in Texas, the pandemic's devastating impact on the oil industry and the Trump's administration's drive to dismantle Obamacare.

"No sitting President, if their name was George Washington, Abraham Lincoln, or even Ronald Reagan, is going to win Texas with a track record like that," state party spokesperson Abhi Rahman said in a statement.

Four years ago, one of the defining storylines of the national GOP convention involved Texas. After losing to Trump in the presidential primary, Cruz famously gave a speech that did not endorse Trump and urged delegates to "vote your conscience," causing an uproar on the convention floor and at a Texas delegation breakfast the next morning.

This year, Cruz was not invited to speak at the convention, though he has said he would have been happy to do so and plans to campaign aggressively for Trump this fall. Cruz is also looking beyond this election — he has spoken openly about his interest in running for president again and has not ruled out a 2024 run.

Cruz, who had his own surprisingly close reelection bid in 2018, has said Trump is in for a "real race" this November in Texas. During an event on the eve of the convention, Cruz acknowledged Trump's reelection challenges, saying Republicans need the election to be a referendum on their ideas instead of Trump and his bombast.

"Listen, the president says many things and tweets many things that I wish he wouldn't, and you know what? I don't have any ability to control that," Cruz said Sunday in a virtual interview hosted by the Republican Jewish Coalition. Still, Cruz said it is a "pretty easy choice" to support Trump despite his conduct, saying it is "not reason enough for me to be willing to hurt our country by handing government ... over to the radical, angry left."

At the same time, Cruz forecasted an "incredibly volatile" November election that hinges on the pandemic. If it continues to slow down and people get back to work, feeling optimistic about their livelihoods again, Republicans could romp, Cruz said. But if case numbers spike and there are more shutdowns, further demoralizing Americans, he added, it could "lead to an election on the scale of the Watergate election." That was the 1974 election in which Democrats made huge gains in the wake of the scandal that brought down GOP President Richard Nixon.

"I don't recall seeing an election in my lifetime with that kind of delta," Cruz said, "that kind of massive volatility between a really good election and a really bad election."