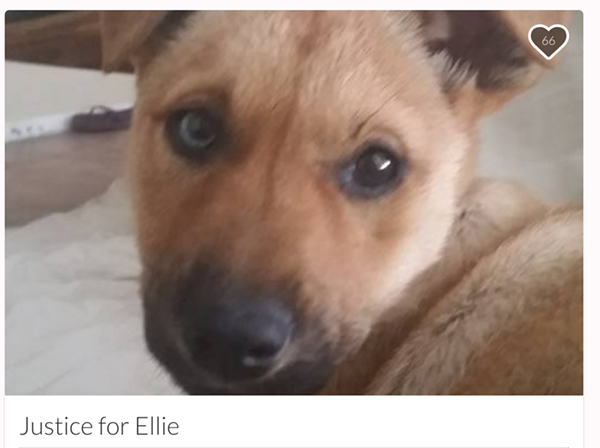 Police in central Texas are investigating a video posted to social media over the weekend that shows a guy shooting a dog multiple times after shoving firecrackers into its corpse and watching it burn.

Police say they first learned of the video after it was shared by someone named Serena Kristiana Teakell on Facebook Friday night. Teakell says she didn't know the man shown in the video, but identified him as an 18-year-old Waco-area resident who'd shared the video via Snapchat (neither Teakell nor the man have responded to requests for comment, and law enforcement investigating the case haven't yet named a suspect). Teakell wrote that she shared the video "because, as it goes with all things, when the public is outraged they cannot turn a blind eye to the subject. At the very least, he will be shamed publicly and at the very least, everyone will be aware of his deep seeded psychological issues."

Police in Hewitt started investigating what they called "an extreme case of animal cruelty" on Saturday after "several members of the public recognized at least one of the suspects" in the video as a Hewitt resident, according to a press release from the department. The department says it eventually learned the video was shot somewhere northwest of Waco and kicked the case over to the McLennan County Sheriff's Office.

When reached by phone Monday, McLennan County Sheriff Parnell McNamara told us the video, which Facebook has since taken down, "made me sick."

"They defile the dog’s body," he said, describing the video. "They put fireworks inside the dog and they shoot the dog with a pistol several times. It’s just a despicable, sick, twisted act, and so we’re trying to do the very best investigation we can on this one," he told the Current. He says the dog appears to have been dead when it was mutilated; he couldn't say how that might impact what charges police could possibly file against any suspects in the case.

McNamara couldn't say whether officials have confirmed the dog's owner, but over the weekend James Plant gave an emotional interview to a Waco-area NBC affiliate saying he lost the dog at a park last week when her collar broke. He says he recognized the dog in the video because of her mix-matched eyes, one blue and one brown. His friends have since set up a GoFundMe page to raise money for "civil litigation against all parties involved"; they also asked that people donate money to the Waco Humane Society.