Texas to Execute First Inmate of the Year Tonight 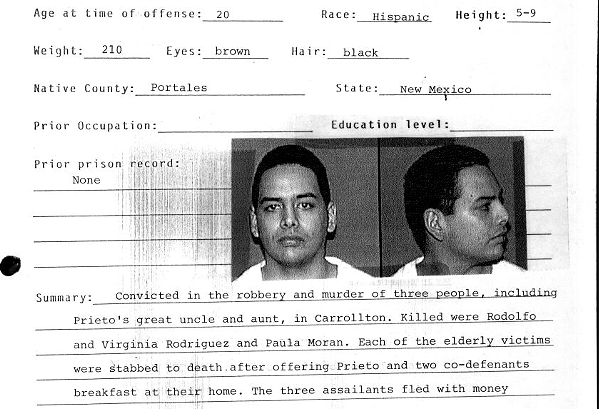 A man who stabbed three people to death with a screwdriver is scheduled to be executed tonight.

Arnold Prieto, 41, murdered husband and wife Rodolfo and Virginia Rodriguez, aged 72 and 62, along with their housekeeper Paula Moran, 92, in 1993. Prieto was convicted in 1995.

According to the Bexar County District Attorney's Office, brothers Guadalupe and Jesse Hernandez told Prieto that Rodolfo Rodriguez, their uncle, had hidden cash in a closet. So the trio drove to San Antonio to pay them a visit, arriving early in the morning. Prieto was 20 at the time.

Virginia Rodriguez let the men into the house and made all three of them breakfast. After eating, the men stabbed the victims to death and stole from them.

Jesse Hernandez, who is serving life in prison, was a day shy of turning 17 when the murders were committed and wasn't eligible for the death penalty, and charges against Guadalupe Hernandez were eventually dropped, according to the San Antonio Express-News.